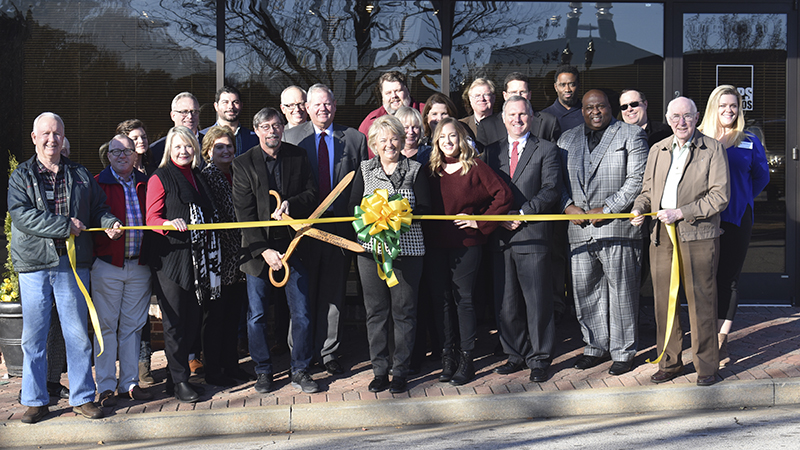 LAGRANGE – Georgia Production Services Studios cut the ceremonial ribbon for its new location on Broome Street Tuesday afternoon, symbolizing to the community the company has officially relocated and is ready to continue doing business in the LaGrange area.

“We do some commercial work as well, really any type of video,” Lisa Arnold said. “It can be anything from telling a story on how Duracell makes their batteries to how Interface lays their carpet. We do a little bit of everything.”

The opportunity arose for GPS Studios to move locations when the decision was made to demolish the company’s old headquarters at 234 Main Street. The Callaway Foundation was able to ensure the company was able to stay in the downtown area, however, with the office space on Broome Street meeting the company’s needs well.

“It’s been great to be downtown, once we got used to it, we really wanted to stay downtown, we once again thank the Callaway Foundation for finding us another location,” Lisa Arnold said. “We’re really happy to be here.”

“We’re so happy to have you here downtown,” said Speer Burdette, President of the Callaway Foundation.

“Coincidentally they were in the old Chamber of Commerce building. We did have a few problems with that building, but they were the best tenants you could ever have dealing with those problems. Finally, we said that building needed to come down, but we thought we had just the place for them to move to, this place. I think this is such a great fit for them.”

“We were so excited to find that you were staying downtown with us, you are such a fantastic business and support the downtown area so well,” Downtown LaGrange Development Authority executive director Bill Hunnicutt said. “We’re excited to have you staying with us.”

GPS has worked with a wide array of clients, including ESPN, Duracell, United Way and Habitat for Humanity, to name but a few.

“Speaking of being downtown, there’s been no better partnership than between the Callaway Foundation and the Downtown LaGrange Development Authority. This is obviously another wonderful signal to keep great people and great creativity in our area,” LaGrange-Troup County Chamber of Commerce President Page Estes said.