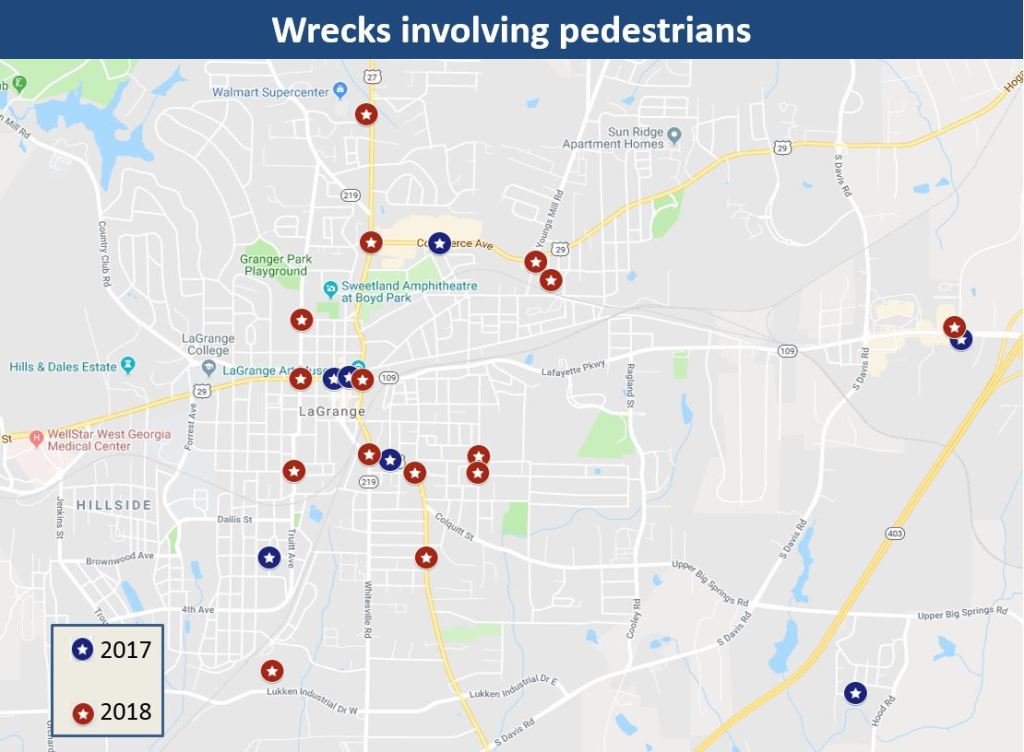 The number of pedestrians hit by vehicles while in the roadway in LaGrange has more than doubled in 2018 compared to the total for 2017, and with two weeks left in the year, the LaGrange Police Department is urging both pedestrians and drivers to use caution.

The most recent incident occurred on Tuesday night on the 300 block of North Greenwood Street. According to a press release from the City of LaGrange, the pedestrian who was struck was airlifted to Midtown Medical Center in Columbus.

In light of these incidents, the LPD is encouraging drivers to be wary of people standing or exercising near the road, paying special attention to young children and older adults who may be less aware of drivers on the road.

“It is important to remember that individuals who are not in a motor vehicle and are in the roadway are extremely vulnerable and more likely to be seriously injured should a collision occur,” LPD Lt. Mark Kostial said in a press release. “If you give pedestrians notice, room and time to move out of your path, you may be able to avoid hitting a pedestrian. The best way to avoid a wreck with a pedestrian is to understand that ‘defensive driving’ means being wary of people who walk, jog or run in the road and also those who are standing in close proximity to the roadway.”

Kostial also said that drivers should be aware that hitting a pedestrian at a speed of more than 30 miles per hour will result in serious injuries or a fatality, but a driver can severely disable a pedestrian in a crash where the driver is traveling only 10 miles per hour.

The locations of the pedestrian accidents in LaGrange in 2017 were Commerce Avenue at Horace King Street, Lafayette Parkway at Patillo Road, Callaway Avenue at Poplar Street, Jarboe Street at Hamilton Road, on the 200 block of Boston Drive, Lafayette Square at Bull Street and Lafayette Parkway in front of Edelson’s Army Store.

Nationwide, almost 129,000 pedestrians were treated in emergency rooms for non-fatal crash related injuries in 2015, according to data from the Centers for Disease Control and Prevention. The CDC recommends that pedestrians increase their visibility at night by carrying a flashlight when walking and by wearing reflective clothing; walking on a sidewalk, path or on the shoulder; and crossing the street at a designated crosswalk or intersection when possible.

As of Tuesday, a total of 234 traffic fatalities involving pedestrians had been investigated throughout the state, according to the Georgia Department of Transportation Office of Traffic Operations.