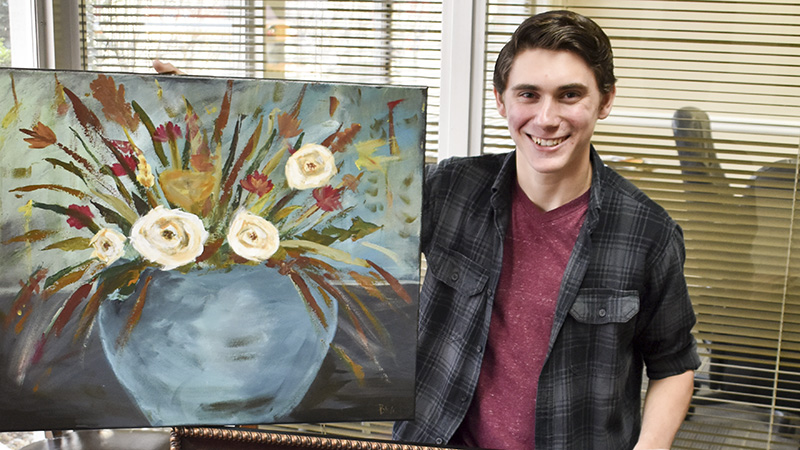 Ben Pemberton poses for a photo with his paintings “Flowers Sienna” and “Evening Glory.” (Alicia B. HIll | Daily News)

Many of local tenth grader Ben Pemberton’s pieces wouldn’t look out of place in local galleries, especially his detailed pen drawings that mark the line between dark and fanciful.

Pemberton attends Olive Plants Homeschool, where he receives art instruction, and one of his drawings received an honorable mention at the West Point Fine Arts’ Dia de Los Muertos art exhibit in October. He likes to compare his work to a cross between classic book illustrations and Dr. Seuss.

“[My art is] very detailed, sometimes a little quirky and sometimes can be very pretty as well,” Pemberton said. “It can be pretty and quirky sometimes.”

His pen drawings are striking with fine details built in between strong lines, but the young artist is also working on branching out into landscape paintings as well.

Pemberton said that he initially began painting with oil paints, but has since moved to acrylic paints due to the cost. However, he said that he has found himself using acrylics in the same way that he would have used oils, which is to say with thicker layers that give the mountains and trees in his work a distinct character.

“I mostly enjoy painting landscapes, but out of the landscapes, my favorite part is the mountains and skies because I just have a knack for painting them,” Pemberton said. “That is what I have been told. … Some of [the landscapes] I create myself, sometimes they are commission works that people send me and sometimes I’ll watch a video of Bob Ross painting, and I’ll be like, ‘I like that.’ I’ll paint it and change it up a bit.”

Pemberton said that when he isn’t working on commissions or school work, he records his paintings in Livestreams that go on YouTube, and he said he hopes that this will just be the beginning.

“It is something that I really enjoy, and it is one of those things that I can do, and I can help others do,” Pemberton said. “A lot of people say that they can’t draw. Nobody really can draw. It is just practice. You have to know how to do it before you can do it, and yes, there are people who can just pick out and understand stuff, but most of it, you have to work for.”

He said he also enjoys employing his artistic skill for special effects for events at his church.

“Most of this stuff starts off unintentionally, and it just carries on,” Pemberton said with a laugh. “The special effects makeup [is something] I do for my church, and we have two very large productions that we put on — one during Easter, which is ‘He’s Alive,’ then one during October called ‘Judgement Journey’ — for both of those, I do the makeup. We have a really good makeup team.”

To learn more about Pemberton, follow him on Youtube.com on the “Ben’s Art” channel.