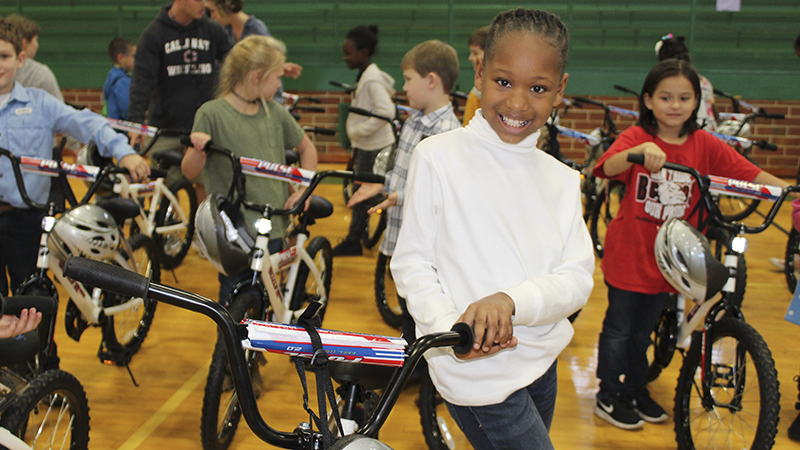 Fifty Hogansville Elementary School students received bikes from Academy Sports + Outdoors as part of a bicycle and helmet giveaway at the school on Tuesday.

Academy Sports + Outdoors donated 50 bicycles and helmets to students at HES for the 17th anniversary of its bike donation program. This is the first year that HES students have been the recipients of the bikes.

“Academy actually donated the bikes to the school, and so we got to choose the students,” said Hanna Beall, an instructional specialist at HES. “Each classroom in kindergarten through third grade was able to nominate several students who really represented our Green Wave work ethic. We have a little motto that we use to be responsible, respectful and safe at work through our voice, effort and values. These kids really demonstrate excellence in behavior, academics. They come to school every day. They try hard. They are always doing the right thing, so sometimes those kids don’t get much recognition, so we are really excited that all 50 of them got this special surprise.”

According to a media advisory from Academy Sports + Outdoors, the program is designed to allow schools to award children during the holidays who have perfect attendance, good behavior, good academic performance or need. Additionally, school administrators said that the donation gave them the opportunity to reward students in a meaningful way.

“We knew the bicycles were more appropriate for kindergarten through third grade students because of the size of the bikes, so then we reached out to the teachers, and we really just wanted them to submit names of students who really followed our Green Wave motto and always do the right thing, try hard,” Principal Gina Turner said. “They are the kids who you just want to reward and find something to do something nice for them.”

The parents were notified in advance, but students found out that they were receiving the bikes on Tuesday and were excited to try them out.

“We are loving the fact that we are rewarding students who are being the ones who are stepping out, getting the good grades, standing up for the ethics and values of Hogansville Elementary, so that was a great opportunity for us,” said Katie Stinson, store director at Academy Sports + Outdoors. “Our values are encouraging kids to get out, be active, so that falls right in line with the donation program for the bikes. Academy Sports does the bike donation to get students outside and active in an active lifestyle.”

In addition to reinforcing those values for students, the donation was also exciting for parents.

“It lets us know that, obviously, we are doing something right,” said Alicia Johnson, who has sons in first and second grade that were awarded bikes. “[They know] that you should respect and be kind to everyone and show them with their attitude and behavior in school.”

She said that receiving bikes for their behavior and success at school would likely be the highlight of their Christmas.

“I think this just made their entire Christmas,” Johnson said. “Everything else they’ll get after this is just a bonus now.”

HES administrators said they hope the bikes will drive home the values that students have been working to follow.

“I think it speaks volumes to them,” Turner said. “It speaks to them that, ‘If I do the right thing every day, there are good things that come our way.’ We teach that to our kids all the time. Academic success is based on giving 110 percent. Even if you don’t always get it right, we are there to help support them. We talk about it with behavior. If you are always doing the right thing, you’ll be rewarded. It might not be instantaneous, but at some point down the road, you get something that is well deserved. I think this just adds to that conversation.”

In addition to congratulations from parents, teachers and school staff, the students also heard from former Callaway High School standout KeShun Freeman, who is from Hogansville. Freeman played college football at Georgia Tech.

“KeShun Freeman came and spoke to the children, and he reiterated to just keep doing the right thing and you will be recognized,” Beall said. “He talked about receiving a bike when he was in elementary school too, and how that recognition has only grown by continuing to do the right thing.”