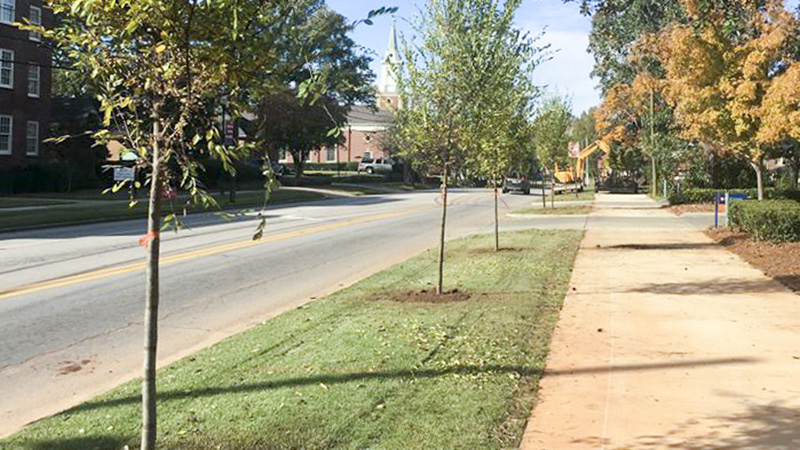 The Thread trail has expanded significantly in the last year and local groups are already examining what kind of impact it is likely to have on residents.

Natalie Hale, the executive director of Friends of The Thread Trail said that the results are encouraging.

“It shows that The Thread is doing what we knew it would do,” Hale said. “It is getting people out there to exercise, people who have never been out walking. People are walking to school, to work and to and from their homes. We’d like to see more people walking to The Thread, but The Thread is not in some places. Once we get more mileage down, we’ll see that number [of people who access The Thread by walking] increase.”

“I appreciate this survey, because it gives us valuable insight,” LaGrange Mayor Jim Thornton said. “I’m glad that people are using The Thread as intended. The project is enhancing the quality of life and the health of our residents. I’m excited for its potential as we build more segments and create more connectivity.”

According to the survey, 82.4 percent of participants said that they felt that The Thread had a high level of impact on their health, and 99.9 percent of people surveyed felt either safe or very safe using The Thread.

“The health benefit is a huge portion of why we do this,” Hale said. “Our society as a whole has not been health [conscious]. Just having more places and more opportunities for them to exercise [is important]. The Thread is the only free amenity that is open to everyone, to all ages, races, economic standings.”

The Friends of The Thread Trail has also been studying the trail’s use at multiple locations.

“We recently put counters in on The Thread,” Hale said. “In the month of October, we had 6,500 people pass the one on the Granger boardwalk, which is a huge number. We had over a thousand people at George Harris and 5,400 on the West Haralson spur. That just shows you how many people are using The Thread. It is really awesome.”

Hale said that she expects to see different types of trail use as The Thread expands through the community.

“Once we get more connectivity, more miles connected, we’ll see more bikers using it for long rides,” Hale said. “Right now, you see more leisurely bike riders and kids learning to ride their bikes, but you don’t see a lot of the hard-core bikers out because we don’t have enough miles in the ground.”

Two segments of The Thread are currently under construction near LaGrange College, which will significantly increase the overall mileage of The Thread.

“We were awarded a grant from the Department of Natural Resources for $200,000 to go toward the portion from where we stopped on Vernon [Road] — right there at Panther [Way] and Vernon,” Hale said. “It will go from there half a mile down to Cleaveland Field at the baseball complex. At the same time, we will be going down Country Club, and it will stop at Pinetree [Drive]. That is 1.4 miles, and that will be in conjunction with the road project.”

The Country Club segment was moved to the front of the line earlier this year, when the LaGrange City Council realized that the road required repaving and landscaping sooner rather than later. Because area near the road was already designated as a future segment of The Thread and inserting the trail will require realignment of the road, the city council agreed that it made sense to build that segment at the same time as the road paving project.

Hale said she expects The Thread’s location near LaGrange College to encourage many students to use the trail.

“It is neat that [LaGrange College students] will get out and start walking, and they’ll be able to walk from the college all the way to the park that has tennis courts that they can use, the track, the playground, the ball fields and different things,” Hale said. “I think it is really going to connect the college with our community.”

However, locals and college students aren’t the only ones enjoying The Thread. Hale said that she has met out of town visitors taking advantage of the local amenity as well.

“The Marriott has our brochures out, and a lot of people staying at the Marriott, we find on our trail,” Hale said. “I’ve met people on our trail from Chicago, California, Wisconsin — all that were staying at the hotel and had seen the brochure and asked for a good place to walk and headed down toward the trail, which is great.”

Based on studies of trail systems in other cities, that connectivity may encourage economic growth due to trail users stopping at restaurants and stores near the trail and increased property values in neighborhoods within walking distance of the trail system. For now, those involved are just excited at the prospect of more people discovering and using The Thread on a regular basis.

“I think we’ll see more people as it comes closer and closer to their area, they’ll be curious,” Hale said. “They’ll come out and walk and see that they love it, and they’ll continue walking.”