Flame of Excellence: Speer Burdette recognized for work by the City of LaGrange 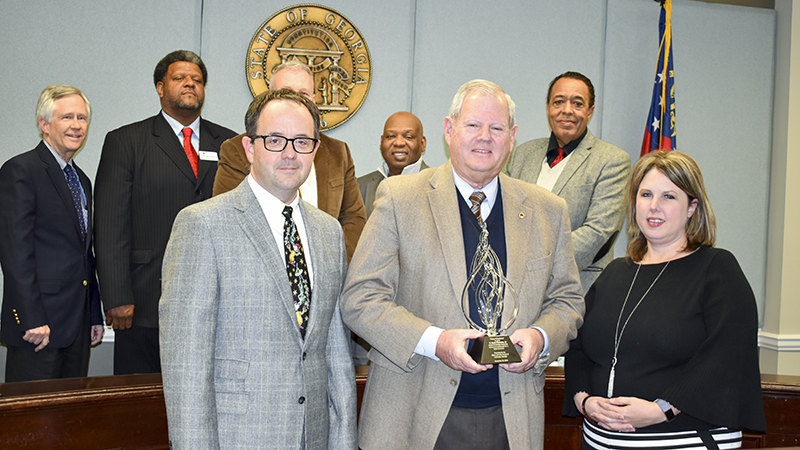 On Thursday night, the LaGrange City Council awarded the Flame of Excellence to Speer Burdette, who is retiring from his position as the president and general manager of the Callaway Foundation.

“Over the past nine years that I have served — four years on the city council and now five years as mayor — every significant discussion that has taken place in the City of LaGrange, Speer has been at the table,” Mayor Jim Thornton said. “Every significant event that has occurred in the City of LaGrange, Speer has been present. I’m not sure there is anybody else, of the 31,000 residents in LaGrange that I can say has been present at every significant event in the life of this community over the past decade that I have been involved.”

Some of the projects that the Callaway Foundation has been involved in under Burdette’s leadership in recent years include Sweetland Amphitheatre, Wild Leap Brew Co., Del’avant Event Center, the AMC movie theater building, Courtyard by Marriott, downtown parking decks and Southbend Park. The council credited Burdette and the Callaway Foundation with making those projects possible and ensuring that LaGrange would have a thriving downtown.

“I have been on council pretty close to 19 years, and I saw the City of LaGrange’s downtown declining, and I saw how the Callaway Foundation with Speer headed the ship [of change],” Council Member Willie Edmondson said. “He came and bought into everything that was brought up — the theater and everything. He tied it together.”

Burdette credited the transformation of downtown LaGrange belonged to all the groups involved throughout the process.

“[I] thank all of you because everything that we’ve accomplished has been as a team — the City of LaGrange, the foundation members,” Burdette said. “It doesn’t happen by any one organization or any one person. … I am glad to have been a part of it.”

However, the mayor and council recognized the impact of Burdette’s leadership on what downtown LaGrange looks like today.

“When I found out you were retiring, I said, ‘You know what. Those are going to be some mighty big shoes to fill,’” said Council Member LeGree McCamey, who serves with Burdette on the DLDA board. “The Callaway Foundation has had a huge impact, and you are heading that foundation. So, I know Mayor Thornton has said you are going to give the credit to the entire — and the credit is due to the entire entity public, private — but if you didn’t have leaders like [Burdette] who actually love this city, who want nothing but the best for this city, I don’t think we’d be where we are right now. That is the entire city. Everything that y’all have touched in this city has turned to gold.”

Council Member Tom Gore also thanked Burdette for the advisory role that he has often played for city leaders.

“One of the things that I appreciate about Speer — and I know many people have this experience — is in LaGrange if you are thinking about doing something, getting involved in public service, taking on a project, thinking about a political campaign or whatever that might touch on city government, usually by the time you finish your discussion, somebody will say, ‘Maybe you should go ask Speer what he thinks about that,’” Gore said. “All of us who have come to you for advice over the years appreciate everything that you have done to help us.”

Burdette was born and raised in LaGrange. He attended LaGrange High School then Vanderbilt University, where he received a bachelor of art in mathematics. He continued his education at the University of Alabama, where he earned a master of business administration with a concentration in accounting. In 1979, he returned to LaGrange and began work at J.K. Boatwright. In 2003, he was hired as the general manager of the Callaway Foundation.

“Speer has had and continues to [perform] a valuable service to the city,” Thornton said. “He’s not going anywhere, but he is approaching a milestone in his life with his retirement from the Callaway Foundation where he has served as president and general manager for the last 16 years.”

In addition to his time at the Callaway Foundation, Burdette has also served on numerous local boards, and Thornton and members of the city council thanked him for that service as well.