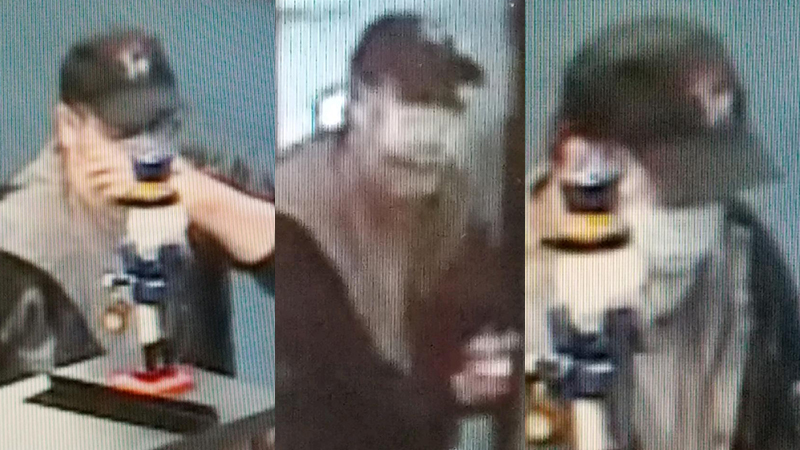 These screenshots show the robbery suspect from Capital City Bank in West Point.

By Chris Heaney
The Valley Times-News

Fawley said that the armed robbery happened at approximately 10:02 a.m. Friday when an armed man entered the bank and slid a note to the tellers demanding all of the money. The police were called and responded in just over a minute but the suspect had already left.

“A man had entered the bank, approached the teller, gave her a note outlining demands for her to give him all the money that she had,” Fawley said. “She complied with his demands and he fled the store.”

Police are still trying to identify the suspect last seen running up West 10th Street towards Lanett. He appears to be a white male wearing a surgical mask, black hat, black jacket and blue jeans. A release also states that the suspect appears to be in his mid-30’s, 6-foot, 230 pounds and “possibly has the flu,” which Fawley explained was due to an excessive amount of coughing the suspect did during the robbery.

Fawley said that police received information that the suspect was seen getting into a black pick-up truck. The amount that was stolen from the bank is still undetermined.

The suspect was considered armed because of what his note to the teller said, but no weapon was presented or could be seen in surveillance footage. No injuries were reported.

“The safety of our associates is among our highest priorities, and we are relieved to report that everyone is safe,” said Capital City Chief Brand Officer Brooke Hallock. “Capital City Bank is working closely with law enforcement to assist in the situation. The office will remain closed the rest of [Friday] but will reopen on Monday with special holiday hours for Christmas Eve from 9 a.m. until 2 p.m.”

Police are working with the Georgia Bureau of Investigations to track down the suspect. Fawley said the WPPD has also reached out to LaGrange police due to the suspect closely resembling a man who robbed a LaGrange Charter Bank in similar fashion this August.

Flame of Excellence: Speer Burdette recognized for work by…