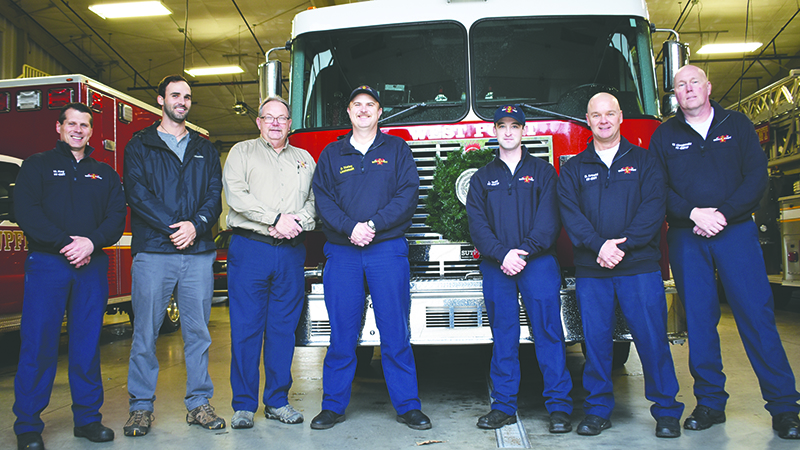 WEST POINT – The West Point Fire Department came up with a special way to say Merry Christmas to the Greater Valley Area.

In a video produced by freelance filmmaker and photographer Jason Walls, Santa Claus is depicted orchestrating the song “Wizards in Winter” by the Trans-Siberian Orchestra, synced to the flashing lights of West Point fire trucks.

The video starts with Santa Claus, played by West Point firefighter Zac Smith, whistling “Jingle Bells,” sitting by a tree, then walking through the halls of the West Point Fire Department and eventually making his way outside.

Once outside, Santa goes to a podium, grabs a candy cane and taps it on the podium. After the tap, the fire department bay doors open, four fire trucks appear and the song begins.

In the 4-minute, 34-second video, Santa conducts the fire trucks through the song and then breaks the candy cane and drops it to mimic a “mic drop,” according to Walls.

At the end of the video, “Merry Christmas from West Point Fire Department,” flashes across the screen.

West Point Fire Chief Milton “Mitt” Smith said he was extremely grateful for Walls’ work, who has been around the fire department most of his life due to his dad being a firefighter for 28 years.

“It was a lot of fun,” Smith said. “We have heard from people as far away from Portland, Oregon. I think it has gotten a bit bigger than the Greater Valley Area.”

He said it took the entire team to make the video happen, but overall, Smith said the fire department wanted to wish the area Merry Christmas.

“Our truest wish was to express Merry Christmas to everybody,” Smith said. “We didn’t know what to expect. We didn’t expect the response we have received throughout the fire service and non-fire service.”

Walls said he has watched fire department Christmas videos in the past, which was his inspiration, but wanted to take it a step further.

Walls said the project started with just syncing the lights and audio together, but after working on it, adding Santa to the video put a story-telling element to the project.

“I just had an idea and started running with it,” he said.

The finished product doesn’t show the several video sequences on top of each other. Walls said he had somebody sit in a truck and activate the lights for about a minute, cut the video and then move to the next one.

He said the whole production took about a week and a half from the time he had the idea to the finished project.

Walls is from Valley and runs his own business producing video, photography and a photo booth. However, no money exchanged hands between the fire department and Walls, as he said it was something he wanted to do.

“I was raised around the fire department,” Walls said.

“The chief has helped me out a lot with my business. It was a personal project.”

He said Smith had a blast playing Santa and did the part well. The candy cane drop was a last-minute decision, but during the video, the Santa hat falls off Smith’s head, which wasn’t part of the plan.

“That was totally genuine and unplanned,” Walls said. “He went with it and kept it going.”