Coach hanging up his whistle 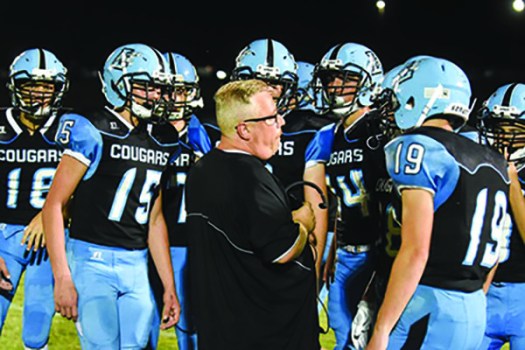 There’ll be a new head Cougar next season.

Nate Shaw, after four seasons as Lafayette Christian School’s head football coach and eight seasons on the staff, has decided the time is right to step aside.

Shaw will remain at the school as a teacher, but he won’t be coaching football any longer.

Billy Bryant, who was an assistant coach last season, will take over as Lafayette Christian’s head coach.

“It’s time,” Lafayette Christian head coach Nate Shaw said. “I’ve done everything I’ve wanted to do coaching-wise. There’s an opportunity cost. You have to give up something in order to be able to do it like that.

Shaw arrived at Lafayette Christian in 2011 after coaching at a school in Wisconsin, and for four seasons he was an assistant coach under Nick Nehring.

Shaw took over as head coach in 2015, and he guided the team to the eight-man Georgia Independent Christian Athletic Association state championship.

In Shaw’s final season, the Cougars made the transition to 11-man football, and they advanced to the GICAA state-championship game before falling short.

Shaw was grateful when the decision was made to promote Bryant.

“He coached middle school the year before this last one, and I brought him up here to be an offensive assistant this year, not necessarily with the intent of having him be my replacement, even though I knew I was leaving last spring when I asked him to coach,” Shaw said. “In my mind, if he had a good season I thought he could take over.”

Shaw added that “he’s a good football mind, a good motivator, and he’s a little bit different change of pace. The team will have his flavor I think, and that’s a good thing.”

Bryant will inherit a team that could be in position to compete for a state title again next season.

There will be some key men to replace, but many of the top players will return.

“One of the things you want to do as a coach is leave the cupboards as full as you can, and I tried to do that in terms of what was available, and his resources,” Shaw said. “With the squad we have coming back, most of our real bread-and-butter play-makers were sophomores this year. That’s a great time to leave, because you’re leaving something for the next guy.”

Nick Nehring, who was the head coach when the program began a decade ago, is also leaving the coaching staff, and he will remain as the athletics director.

During the time when Nehring and Shaw coached together, the Cougars won a state title, finished second once, and made it to the state semifinals five times.

“We talked about it a little bit together,” Shaw said. “It just came down to the point where we were both in the same position. It takes a lot out of you. We had a good run together.”

Shaw is grateful for the opportunities he has had at Lafayette Christian to not only coach, but to hopefully be a positive influence on the lives of hundreds of young men.

“You don’t know until you go through it how much time you spend with these boys,” Shaw said. “You just hope you make a positive influence on them. It’s a Christian school, and you hope you’re able to have opportunities to present the gospel to them. You’ve seen men make life-changing decisions in that realm, and that’s really satisfying.”