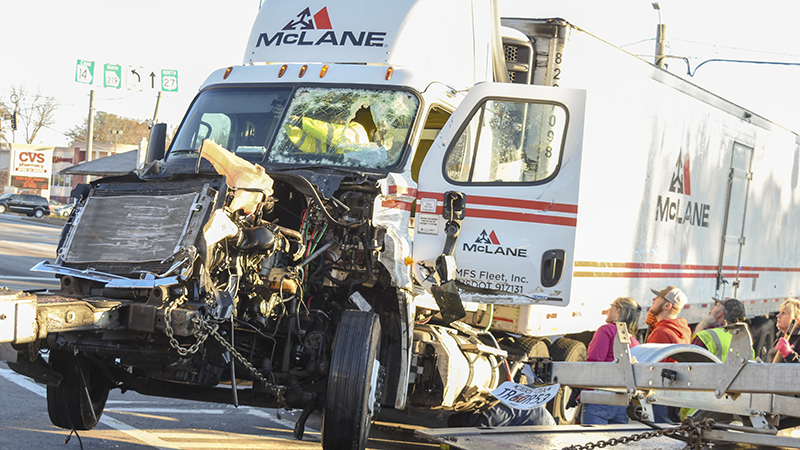 A Christmas Eve wreck involving a semi-truck trailer and another vehicle forced motorists to find another path downtown on Monday morning.

The accident took place at the intersection of Lafayette Parkway and Morgan Street and the LaGrange Police Department had to block off several streets as cleanup took place. The accident occurred around 5:30 a.m., according to Sgt. Rogelio Perez.

The accident appears to have missed the LaGrange Art Museum, but it did take out several roadway signs that direct motorists around one of one of the busiest intersections in town.

The tractor trailer was carrying several boxes featuring fast food logos, as well as napkins and utensils. Dozens of the boxes had to be unloaded so that the truck could be flipped back on its side.

“I know initially they couldn’t tip it over because it had too much weight,” Perez said.

By 8:30 a.m., the accident scene was almost cleared. The tractor trailer had been flipped over and cleanup was almost done. The LPD had been directing traffic for about three hours at that point.

On a normal day, that would’ve been a major headache for motorists and likely would’ve caused a major traffic backup. On Monday, with so few people working, there was little traffic downtown.

McWaters, Crews, English sworn in for another term in…