Year in Review Part III: Looking back at July-September 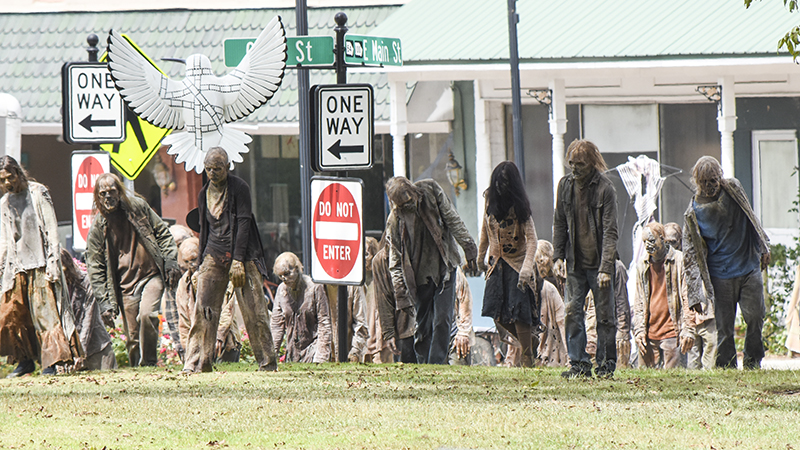 AMC’s “The Walking Dead” was filmed in Hogansville in September. --File Photos

EDITORS NOTE: This is the third of a four part series looking back at the year 2018 in Troup County:

Judge Donald Boyd celebrated his retirement in July and swore Chief Probate Judge Debbie Wade in as the new probate judge in July. Boyd served as the probate judge for almost 18 full years.

Twenty one dogs were rescued from a house in Hogansville in July. Authorities said the animals were living in “horrendous” conditions in the home, which included large amounts of animal feces and showed signs of rodent infestation. Bobby McCoy, 27, was arrested and charged with neglect by caregiver and cruelty to animals.

New scoreboard up at Callaway Stadium

The scoreboard, which was ready for the start of football season, was up by July. The new board cost around $400,000, with many different entities paying a portion of the funding.

The Greenville Street Bridge in LaGrange has been closed since 2016, but it’s under repair thanks to an $8.9 million grant from the Georgia Department of Transportation.

John Davis, 40, was killed after the car he was driving in was shot at in July. Davis was in the car with a 15-year-old and a friend when a suspect opened fire. Davis was transported to a Columbus hospital and was declared deceased. The other two victims suffered non-life threatening injuries.

A winning Fantasy 5 lottery ticket purchased in Hogansville was claimed in August, making someone fairly rich. Two winning tickets were sold for the nearly $1.4 million prize.

The LaGrange Fire Department became the tenth in Georgia to earn accreditation from the Commission of Fire Accreditation International in August. It was a three-year process for the LFD to earn the accreditation.

The Troup County School Board accepted Dr. Cole Pugh’s resignation during its August board meeting. Dr. Roy Nichols was named as Pugh’s replacement. Pugh was paid his remaining salary of $152,891 as part of the resignation agreement.

Two inmates escaped from the Troup County Jail in August. Eric Calvin Bell, 28, and Thomas Christopher Cuddington, 28, were discovered missing around 8 a.m. on Aug. 16. They escaped through the roof. Both were caught within a week and sent back to jail.

The body of 24-year-old Maranda Whitten was found at West Point Lake in August. After a three-day search by authorities, Whitten’s body was found and her death was ruled a suicide.

The Troup County Board of Education approved a guaranteed maximum price of $14.1 million for the Troup County High gymnasium. The cost increased from the $12.6 million price the board approved in October 2017. Tariffs and a general increase in price for construction material was blamed for the cost increase.

CharterBank on South Davis Road was robbed after a white male handed a note to a teller demanding money. No one was injured in the robbery and the man left with an undisclosed amount of money.

Six LaGrange Fire Department firefighters were injured in a house fire on the 300 block Revis Street in September. Four firefighters — Josh Williams, Jonathan Williamson, Pete Trujillo and Jordan Avera — were severely injured in the fire and were hospitalized for weeks afterwards.

The hit AMC series filmed an episode of its ninth season in downtown Hogansville in September.

K9 officer Chico, who served for the LaGrange Police Department from 2010 until 2018, died in September. Chico died of cancer. His handler was Wendy Bryant.

The LaGrange Animal Shelter took in nearly 70 animals being evacuated from Hilton Head, South Carolina due to Hurricane Florence. Fifty cats and 16 dogs were taken in.

Around 250 people took part in the Walk to End Alzheimer’s at Vernon Woods Retirement Community in September. The goal for the walk was to raise $58,000. By the day of the walk about half of that goal was raised with donations still coming in.

Graduation rates on the rise

Josh David Pursley, 38, was struck by a train and killed in Hogansville. He was from Tennessee.