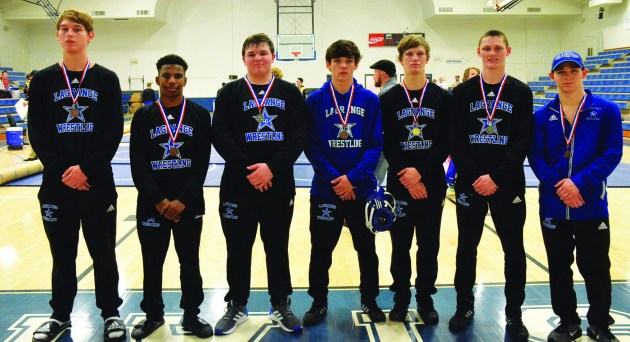 LaGrange had eight placers, including Anderson, who secured his first varsity tournament championship.

Wrestling in the 145-pound division, Anderson finished with a 3-0 record to claim top honors.

“It meant a lot to me,” Anderson said. “I had my entire family here, so I wanted to win.”

It was all Anderson, who rolled to a 7-1 victory.

“I kind of feel like I was a little bit stronger than him,” Anderson said. “He was a lot faster, so I just had to wrestle to my strengths.”

Whaley had a bye before beating Christian Cervantes of Central-Carroll, and he lost to East Coweta’s Titus Aun in the championship match.

At 285 pounds, Devin Harris finished second with a 2-1 record, and he lost to Harris County’s Chris Hardaway in the title round.

Callaway, a state placer last season, won his first two matches before losing to Robert Mulvaney of Columbus in the championship match.

Austin Skiff didn’t place, but he won a match.

“Austin Skiff wrestled good,” Weathers said. “He’s getting better and better. This is his first year wrestling. He’d never put a singlet on. He’s a big motivator and team guy.”

Also winning a match for LaGrange was Tavarrious Reed (126 pounds).