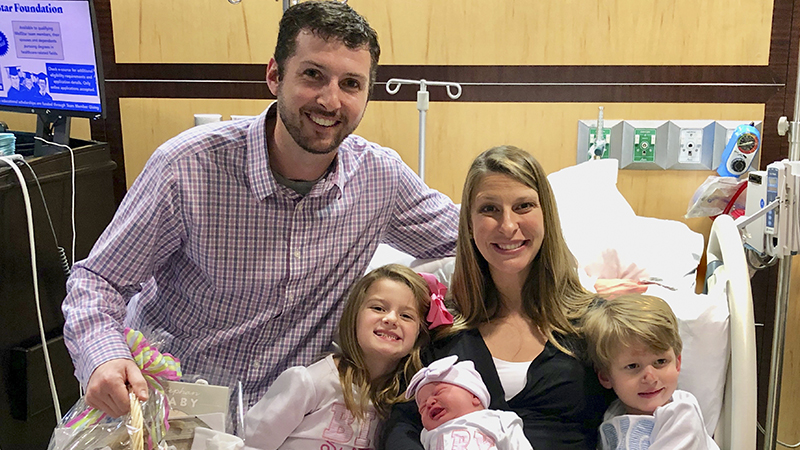 As a general surgeon, Dr. Ralston Major doesn’t frequent WellStar West Georgia Medical Center’s Labor & Delivery unit often, but on Tuesday, he and his wife, Amanda, were front and center as they welcomed little Clara Joy Major, the hospital’s first baby born in the New Year.

Clara Joy arrived at 9:34 a.m. after her parents retraced the steps they took when their second child, Grant, now 3, was born.

Sure enough, the labor pains began around 11 p.m. Monday, and they headed to WellStar West Georgia. Both Major and his father, Dr. Grant Major, are members of the medical staff at the hospital and are physicians with Emory at LaGrange, as was his grandfather, the late Dr. Cecil Major.

Dr. Major said he stayed at the head of the bed, decidedly playing his familiar role of husband and father rather than doctor.

Big sister Lilly Dale, 5, and big brother Grant welcomed Clara Joy with pink and white cupcakes to celebrate her birthday, along with her grandparents, Grant and Becky Major — known as BeBe and Boppo — and Rhonda and Bobby Nichols of Tullahoma, Tennessee — known as Gracie and Sirs.

She is the Majors’ eighth grandchild, while the Nichols now have 12. Clara Joy also will get to meet a dear woman familiar to so many in LaGrange — her great-grandmother, Glenda Major.

Becky Major said their family remembers Dr. Cecil Major lovingly as Papa Doc, so when her first grandchild was born, she and her husband tried to think of an equally special grandparent name for him.

“Grant finally said he had thought of a name for himself,” Becky said. “It was ‘Guapo,’ which means ‘handsome’ in Spanish. But our first grandchild couldn’t say ‘Guapo,’ and instead she pronounced it ‘Boppo.’ It’s stuck for him ever since.”

As the first baby of the New Year, Clara Joy received a gift basket filled with a teddy bear, children’s books and other goodies from the maternal/infant services team members at WellStar West Georgia.

Each gift was special in its own way, but another one in particular was completely unexpected by the family, and its backstory is as touching as the hope and renewal that Clara Joy symbolizes as the community’s first new life in the New Year.

The hospital had arranged for the family to receive a visit from Tommy Griggs, who has visited the New Year’s first-baby family each year ever since his grandson, Camden, was the first baby born in the New Year in 2014.

His daughter and son-in-law, Adrienne and Justin Sands, had experienced a miscarriage before Camden was born, and Griggs said he and his wife, Venessa, have felt called since then to be a blessing to the first baby’s family every New Year.

Griggs gave the family a card with an enclosed gift as well as a heartfelt message of the love and hope each new life brings. He also expressed gratitude to the nurses, doctors and others who touched his family’s life when Camden was born five years ago.

In addition, he spoke of the importance of making a positive impact on the lives of others. His message was especially fitting, for Major and Griggs’ son, Jeremy, were once on the same little league team together. In addition, both Griggs and Grant graduated together from LaGrange High School in 1975.

“Someone you meet only in passing may come back into your life again, just as we have today after I knew you and your dad so many years ago,” Griggs said. “We never know how an act of kindness and love will come back around.”