Freeman gets shot with new league 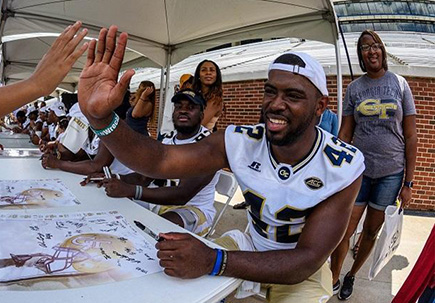 With his quest to play in the NFL temporarily on hold, KeShun Freeman has turned to another league as he looks to make it as a professional football player.

Freeman, the former Callaway High and Georgia Tech standout, is a member of the Atlanta Legends, who are one of the eight teams in the Alliance of American Football league.

Each of the league’s teams will play 10 regular-season games, and the top four teams will qualify for the playoffs.

The championship game will be played in April.

Atlanta will open its season with a road game against Orlando on Feb. 9, and it will make its home debut on Feb. 24 against Birmingham.

The league is a mixture of veterans who have already gotten a taste of the NFL, and younger players like Freeman looking to make their mark in professional football.

Freeman, an all-state player at Callaway, was a four-year starter as a defensive lineman at Georgia Tech.

Freeman wasn’t selected in the NFL draft last summer, but he was signed by the New Orleans Saints as a free agent.

Freeman was with the Saints throughout the preseason, but he was cut shortly before the final 53-man roster was announced.

Late last year, Freeman agreed to join the Legends, and he’ll be a part of a team that is made of almost entirely of players who were members of college teams in this part of the world.

Among the high-profile members of the team is former Georgia quarterback Aaron Murray.

Also on the team is Justin Thomas, the former quarterback at Georgia Tech who has transitioned to wide receiver.

All of the league’s teams are in San Antonio for training camp, and when the teams return home, they’ll have to trim their final rosters down to 52 before the start of the season.

Freeman has been successful as a football player on every level so far.

At Callaway, Freeman was an all-state player, and he helped lead the team to a berth in the state semifinals as a senior in 2013.

Freeman stepped right into the lineup as a freshman at Georgia Tech, and he started for four seasons.