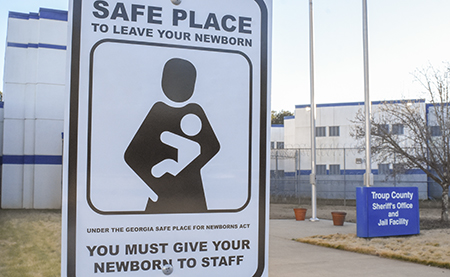 Many questions remain unanswered after a deceased newborn was found abandoned in a cooler in Troup County Sunday. As of Wednesday afternoon, the cause of death, the identification of the child and the reason why someone would abandon the child were still unknown.

Local law enforcement is using the incident as a chance to highlight safe haven laws, which vary from state to state but allow parents to give newborn children to state-specific agencies without facing criminal charges.

Georgia’s Safe Place for Newborns Law allows 30 days for children to be taken to a law enforcement agency, fire station or medical facility. The parent does not have to provide any additional information, but the child does have to actually be given to an official at the facility.

“If a mother or father has a child and feels like they are incapable of taking care of it, they can drop it off at a police, fire or medical facility,” said Troup County Sheriff’s Office Sgt. Stewart Smith. “They have to physically drop it off. They cannot leave it on the curb or anywhere else. It’s from the day of birth up to 30 days without question.”

In Alabama, the law is a bit more strict, only allowing 72 hours for parents to leave their child with emergency medical personnel only. According to Chambers County Human Resources Supervisor Angie Flournoy, medical staff will attempt to determine the health of the child and details about the parent, but the parent is not required to answer any questions.

“The Alabama law provides a way out for parents who feel compelled to abandon a child,” she said. “The purpose of this state law is to save the lives of babies who might otherwise be abandoned. If the baby is brought in unharmed within the 72-hour limit, there will be no prosecution for abandonment.”

According to Smith, leaving a baby anywhere but the aforementioned locations within the time limit is considered abandoning the child, which is illegal in both states and could lead to jail time.

Jonathan Herston, executive director of family services center Circle of Care in Chambers County, said financial instability can often be the reason a child is abandoned.

Herston said Circle of Care has a network of mental health resources for all income levels around Chambers County and internal programs for expectant mothers who may be worried or scared.

“We do the Medicaid Maternity program,” he said. “That helps with prenatal care, financial planning and all those sorts of aspects. Babies are really expensive and if you don’t have the finances there then we talk about those realities, find ways to work through hardships and try to prevent another pregnancy before being financially stable enough to go through that.”

Other Circle of Care programs for expectant mothers include a caravan service that helps transport individuals to medical appointments and home visitations to help screen the needs of both parent and baby.

“They need to come in and talk with us so that we can get a feel for what their fears and what their concerns are,” Herston said. “This could be a situation where they feel overwhelmed and have other stressors that are pushing them into not wanting the child.”