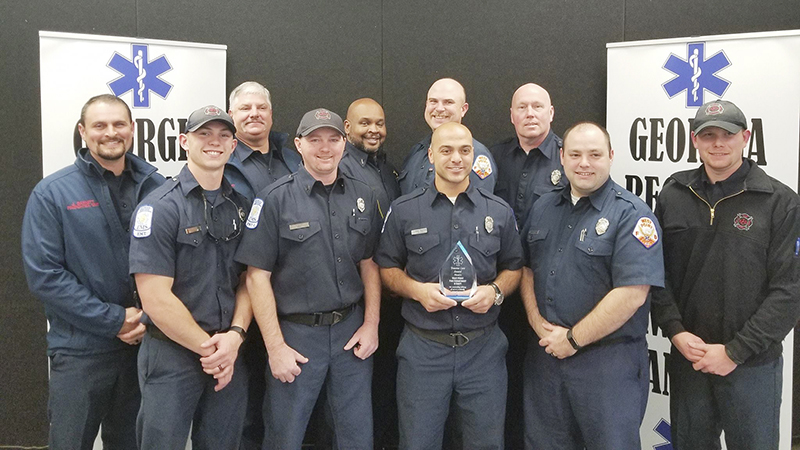 WEST POINT — Firefighters in west Georgia have been honored for their quick response to a fatal, single-car accident in July.

The West Point Fire Department and the Troup County Fire Department were recently honored at a banquet held by the Georgia Department of Public Health’s Emergency Management Services. The local firefighters were honored in GDPH’s Region 4.

The departments were honored with the Trauma Care Award for their efforts at a July 27 traffic crash next exit 6 on Interstate 85.

West Point Fire Chief Mitt Smith said it was an honor to be recognized, but there were many people and agencies that responded to help.

“It is great recognition for the great people who do a lot of things to preserve life in a tragedy such of this,” he said. “It took an entire village to make this happen.”

West Point Fire Chief Mitt Smith still remembers the day well, recalling that a family of six were traveling from Atlanta to Florida for a beach vacation at about noon on a Friday.

He said a failed tire seemed to be the early indication for the accident, as the Ford Expedition flipped many times on the interstate.

The Valley Times-News reported at the time that the SUV was carrying six people were traveling on I-85 when it went over a guardrail and dropped 10 feet down into an embankment.

Smith said four passengers, ranging from ages 5 to 19, were ejected from the vehicle. He said they were later flown to trauma facilities in Atlanta.

Smith said the children have recovered from their injuries. The father of the children received non-life-threatening injuries. However, the mother, who was in the passenger seat, was found deceased still inside the vehicle.

“It looked like a war zone,” Smith said in July. “Their belongings, blankets, phones, electronics, toys and tools, were scattered all over the road.”

He said first responders were running around everywhere, and it looked like mass chaos, but it was actually handled very professionally.

“It was a well-orchestrated mass casualty situation,” Smith said.

He said it shut the interstate down for several hours.