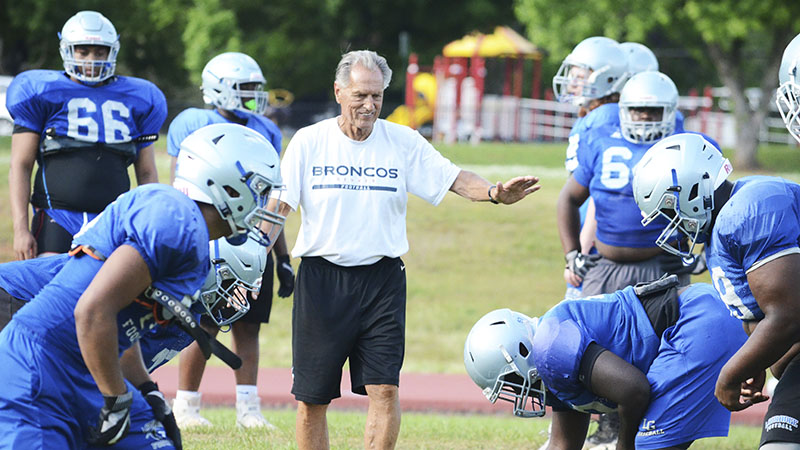 To the football world, Alex Gibbs is a celebrated coach, a noted offensive-line whisperer who has helped shape some of the NFL’s most dynamic offenses for three decades.

Many of Chuck Gibbs’ earliest memories of his father revolve around football, whether it was at a game on Saturday afternoon with 80,000 howling fans at Jordan-Hare Stadium or in a car on Friday nights as the two of them traversed the Southeast for recruiting visits.

On Sunday afternoon, Chuck Gibbs will watch his dad work again, as he’s been doing for more than four decades now.

Alex Gibbs is an assistant coach for the New Orleans Saints, who will host the St. Louis Rams on Sunday in the NFC championship game, with the winner facing the New England Patriots or the Kansas City Chiefs in the Super Bowl in Atlanta on Feb. 3.

The 77-year-old Alex Gibbs, known as the godfather of the zone blocking scheme, has worked with the Saints since 2016, primarily as a consultant, although he has been a full-time member of the coaching staff for most of this season.

If all goes well on Sunday in the Big Easy, there’ll be a Gibbs family reunion in Atlanta in two weeks.

It’s a reunion that would include Chuck Gibbs, as well as his brother David Gibbs, who last week was hired as an assistant coach at Missouri.

“My dad might have all of his kids wanting to bring all of their families,” Chuck Gibbs said with a grin.

For Chuck Gibbs, who is preparing for his second season as LaGrange’s head coach, there is no one who has had more of an influence on his career than his father.

The two talk often, and Chuck Gibbs brought his father in during preseason practice last year to work with the LaGrange team.

“We had 50 coaches when he was here this last spring asking if they could come by, could they talk,” Chuck Gibbs said. “We had a coach fly out here from south Florida just to sit in here and pick his brain.”

If Chuck Gibbs needs some advice, he knows he has his father to turn to.

“I’ll call him and ask what do you think, how do we deal with that,” Chuck Gibbs said. “He’s able to walk us through solutions. He’s done it all for 50 years.”

The two were even on a coaching staff together once.

When Alex Gibbs was with the Atlanta Falcons during the Michael Vick era, Chuck Gibbs served as a coaching intern.

That team reached the NFC championship game before losing to the Philadelphia Eagles in 2005.

“It was a great experience for me to be able to coach with my dad and learn,” Gibbs said.

Some of Gibbs’ earliest memories with his dad involved trips on the recruiting trail.

Alex Gibbs, who was a standout collegiate player at Davidson in the early 60s, coached at Duke, Kentucky, West Virginia and Ohio State before landing at Auburn as the offensive coordinator in 1979.

Gibbs joined the Georgia staff in 1982 and spent two seasons as the offensive-line coach. During those years when Alex Gibbs was at Auburn and Georgia, he and his son spent a lot of hours on the recruiting trail. Among the players Alex Gibbs gave his pitch to were Bo Jackson and Herschel Walker, two of the greatest running backs in college-football history.

“My parents got divorced when I was 10,” Chuck Gibbs said. “The only time I got to see my dad was Friday nights when we were recruiting together. It was kind of our time. He’d pick me up at 10, 11, 12-years-old, and I’d spend my Friday nights with him. I’m holding my map in the car because we didn’t have cell phones or GPS.”

Alex Gibbs made the jump to the NFL in 1984 as the offensive-line coach of the Denver Broncos, and he has been affiliated with the league ever since.

When Denver won back-to-back championships in 1997 and 1998, and Terrell Davis ran for a combined 3,758 yards with 36 touchdowns, Gibbs was the offensive-line coach and assistant head coach.

In 1998, Davis joined an exclusive club when he ran for more than 2,000 yards, and he scored 21 touchdowns that season.

The zone-blocking scheme installed by Gibbs played no small part in the success enjoyed by those Denver teams.

That resume, that ability to mold and sculpt offensive lines, means that some team is always seeking to bring Gibbs on board.

When the Saints were looking to change things up on offense, and take some of the pressure off of Brees, head coach Sean Payton brought in Gibbs as a consultant.

Gone are the days when Brees throws the ball 50 times a game and the Saints would try to out-score everyone.

Brees has played at an MVP-level this season, but the Saints have also run for more than 2,000 yards, and they average more than four yards per carry.

It helps to have two talented running backs in Alvin Kamara and Mark Ingram, but it all starts up front.

The Saints have an elite offensive line that not only opens up gaping holes for the running backs, but makes sure Brees has time to sit back and torment opposing defenses.

Gibbs works closely with the offensive linemen, guiding them in practice, or leading them through film sessions.

If the Saints win Sunday, Gibbs will participate in his seventh Super Bowl.

“They’re having the time of their lives, and my dad’s learning a lot,” Chuck Gibbs said.

While Alex Gibbs clearly knows the sport, Chuck Gibbs said it’s his ability to relay that information to the players that makes him so effective.

“His greatest strength is, he is a teacher,” Chuck Gibbs said. “He wanted to be the assistant principal of Auburn Junior High School when he was the offensive coordinator and assistant head coach of Auburn University. We all refer to him as doc. He’s got his doctorate in European history. He knows how to teach. And the ability to teach it is more important than the scheme itself.”

Chuck Gibbs has followed in his dad’s footsteps and gone into coaching.

After graduating from Auburn, Gibbs was a standout football player at West Point.

During his 10-year stint in the U.S. Army when he was a helicopter pilot, Gibbs got his feet wet as a coach, working at a handful of schools.

After moving to Hawaii and becoming a financial planner, Chuck Gibbs went into coaching full-time at Scottsdale Christian Academy, and he enjoyed four successful seasons before taking the job at LaGrange.

Chuck Gibbs, whose son Kale will a junior on the football team next season, is looking to get the program turned around, and he won’t be shy about asking his father for help.

“I’m going to have my dad back out here for spring ball, and in the summer if we can,” Gibbs said. “Obviously, Sean Payton is really high on him right now, and wants to keep him around.”

Alex Gibbs has been in the coaching business for 50 years, and he’s spent more than three decades in the NFL.

For most of that time, he has specialized in coaching the offensive line, and the majority of teams in the NFL use the zone-blocking technique that he has been teaching for decades.

“As you talk to coaches around the league, you can see the respect for him,” Chuck Gibbs said. “I think 23 of the 30 teams now run his schemes or some sort of it. They flip it. It’s just neat to see something that your father’s been an architect of work in a league that has parity. The difference between the best and the worst is minute.”

While Alex Gibbs has remained active in coaching, he has also been able to spend a lot of time with his family. Chuck Gibbs is grateful that his father has been able to attend games and see his son play for the Grangers.

“It’s been special is for him to be here and be able to watch his grandson play and compete,” Chuck Gibbs said.

Whatever happens this weekend, Chuck Gibbs wouldn’t be surprised to see his father, even as he closes in on 80, continue to be a part of the sport that means so much to the entire family. Early in his adult life Alex Gibbs found his calling, and 50 years later that passion hasn’t waned.

“You love what you do, and do what you love, and you’ll never work,” Chuck Gibbs said.