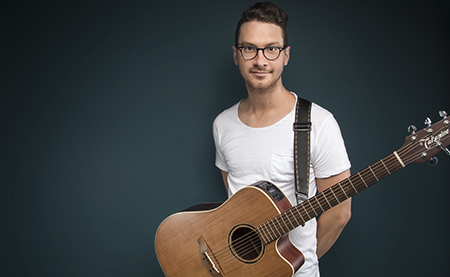 Jacob Johnson, a guitar player, singer and an award winning songwriter, is slated to perform at Pure Life Studios on Saturday at 7:30 p.m.

Johnson’s songwriting has won awards and his guitar-playing has put him on stage with Tommy Emmanuel and Phil Keaggy.

Since dropping out of college in 2007, Johnson has traveled the country in six minivans, honing his craft and making friends and fans along the way. Grammy-nominated Australian guitar legend Tommy Emmanuel put Johnson, as his opening act, on notable stages such as The Birchmere in Virginia, The State Theater in Maine and The Newberry Opera House in South Carolina.

The songs and performances that developed in those touring years became the basis for Johnson’s most recent album, “One-Take Jake.” “One-Take Jake” features 11 of Johnson’s most requested songs recorded live in-studio with no-overdubs. The songs range from his own award-winning “The Ferryboat Waltz” to his unique take on the Disney classic “Chim-Chim Cheree” by the Sherman Brothers.

“When I saw Jacob play, I instantly paid attention,” said Maggie McDonald, owner/operator of Pure Life Studios, “I was so taken by his guitar skills and loved how he engaged with the audience. He is entertaining and corny in an old movie kind of way. His voice is smooth and inviting. He just put a smile on my face.”

The concert will take place at Pure Life Studios, an acoustic listening room, located at 206 Clark Street in the Hillside neighborhood of LaGrange. Doors open at 7 p.m., and music starts at 7:30 p.m. The concert is $20 (cash only at the door) or visit Purelifelagrange.com.

to secure your ticket. Pure Life Studios is brown bag approved, and coolers are welcome.