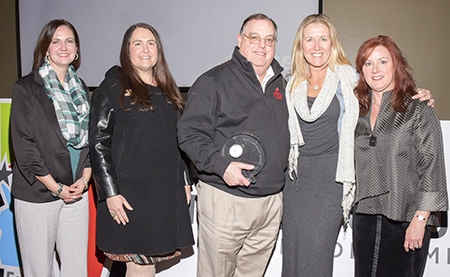 With nearly 500 members in attendance, the LaGrange-Troup County Chamber of Commerce announced four award winners and welcomed Marlene Rhodes from Renasant Bank as its incoming chair during the 2019 Annual Meeting presented by True North Investments on Thursday at the Great Wolf Lodge Conference Center.

Each year, the chamber honors volunteers and community leaders who have made a lasting impact on the community. The 2019 honorees have enriched the lives of many through their contributions. Jerry Fulks, Bill Stump, Dale Jackson and Deedee Williams were honored at the meeting.

The Tom Hall Innovation Award was awarded to Fulks, the retired president of WellStar West Georgia Medical Center. Under his leadership, the hospital created the West Georgia Health Foundation and West Georgia Physicians, as well as launched several new service lines. He also created the vision and laid the groundwork for building a new four-story patient tower. He spearheaded efforts to solidify the future of healthcare in Troup County through the merger with WellStar.

An active member in the community, Fulks has served as chairman of the chamber board of directors in 2005, president of the LaGrange Rotary Club and chairman of the West Georgia Technical College Board of Directors. He has also served on boards for the United Way, Synovus, Twin Cedars and the Development Authority of LaGrange. His plan to recruit top physicians to WellStar West Georgia Medical launched the chamber’s talent recruitment efforts.

Stump, president and CEO of Community Bank – West Georgia, was honored as the recipient of the 2018 Jane Fryer Award, sponsored by The Ray and Groundswell, in recognition of his tireless efforts to make Troup County the best place to live, learn, work and raise a family.

Established in 2008, the Fryer Award is given annually to recognize a member of the Chamber community who has gone the extra mile to get involved in programs and activities that benefit our community.

Stump served as Chairman of the Chamber Board in 2012.  He continues to serve on numerous local boards and currently holds multiple leadership positions with the Downtown LaGrange Development Authority, United Way of West Georgia, THINC College & Career Academy, Rotary Club of LaGrange and First Presbyterian Church.  He remains active with the Chamber, including serving as Chairman of the Chamber’s first Total Resource Campaign.  Through Bill and his more than 40 volunteers, the Chamber more than doubled its annual sponsorship and advertising commitments for the upcoming year.

In recognition of his voluntarism and strong commitment to create opportunities to showcase the chamber and our members to the community at large, the 2018 Ida Tarver Jones Volunteer of the Year, sponsored by the Troup County School System, was presented to Jackson.

In 2013, the Chamber board created the Ida Tarver Jones award in her memory to recognize an individual who exemplifies her volunteer spirit. During her years as a volunteer, she dedicated countless hours of service to answering the phones and covering the front desk. Ida was a true servant leader.

Williams, of the Georgia Department of Labor, received the 2018 Otto Korth Diplomat of the Year Award. According to a chamber press release, Williams embodies the welcoming spirit of Otto, dedicating countless hours to attending special events, mentoring new members and thanking existing members. Created in 2015 to honor Korth for his service as Diplomat Extraordinaire, the award is presented annually to a Diplomat that excels at serving as a liaison to chamber members.

The LaGrange-Troup County Chamber of Commerce also announced its new officers and at large board members, which were approved by chamber members.

Marlene Rhodes, market president at Renasant Bank, succeeds Casey Smith of Calumet Bank as chamber chair for the 2019 calendar year. She has previously served as chair-elect and secretary/treasurer on the chamber board.

The membership also approved a new slate of directors and officers to serve on the board.

This year’s slate includes Chairman-Elect George Bailey, who will become the first African-American and City of Hogansville representative to serve as chamber chair when his term begins in January 2020.

LaGrange-Troup County Chamber of Commerce is the economic development organization that regional leaders depend on to get the job done through a core strategy of fostering and nurturing relationships.  For more information, go to Lagrangechamber.com.