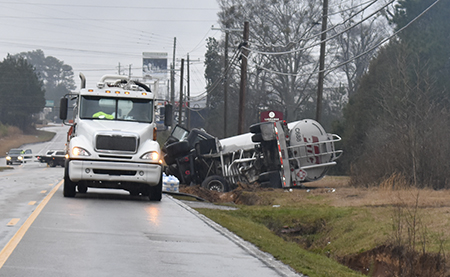 A tanker truck carrying gasoline ran off the street on Whitesville Road and turned over early Tuesday morning, according to information from the LaGrange Fire Department.

“About 1 o’clock this morning, this truck with about 8,800 gallons of gasoline ran off the road in the ditch,” LFD Lt. Bill Brazell said.

The overturned truck resulted in a minor detour for drivers traveling through the Whitesville Road Elementary School section of the street, and some buses were unable to leave the parking lot of the former school. The road was closed for over 12 hours as work to clear the scene continued into Tuesday afternoon.

According to the LFD, no major injuries were reported as a result of the accident, but the driver of the truck was taken to WellStar West Georgia Medical Center.

Brazell said that the truck had a minor leak, which was contained, and measures to block gasoline runoff were taken. Even with the leak contained though, they knew the cleanup would take time.

“We are waiting for a truck to come from north Georgia to safely transfer that fuel off of that truck [that wrecked] onto another truck,” Brazell said Tuesday morning. “Then the wreckers will pick it up off the road. It is one of those things with hazmat where you take your time and do it safely.”

Brazell said the LFD planned to put out a layer of suppressive foam as a precaution prior to the transfer.