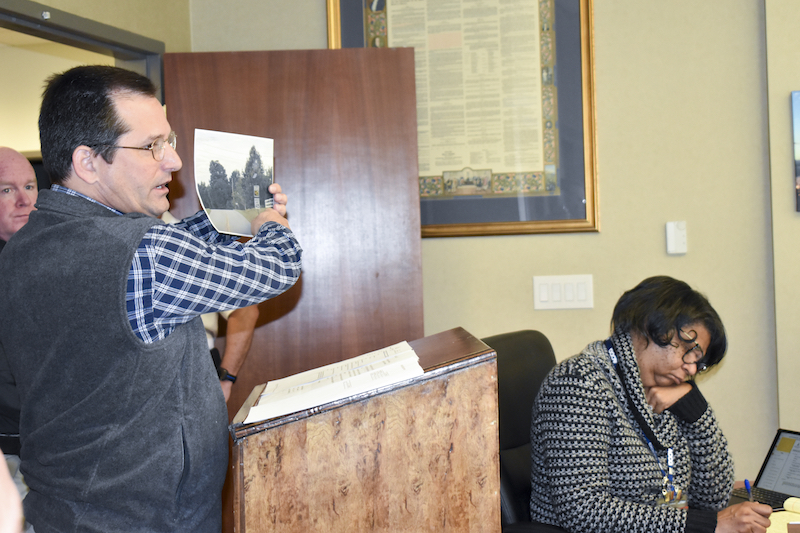 On Tuesday, County Engineer James Emery discussed some of the actions that the Troup County Roads and Engineering Department, the Troup County Sheriff’s Office and the Georgia State Patrol have taken to improve safety on a small road that has seen a major increase in traffic in recent years.

According to information released at the Troup County Board of Commissioners work session, Adams Road has seen an increase in traffic to 834 vehicles per day, due to drivers from local factories using the road to travel to and from work, which has been cause for concern for some area residents. In 2012, the average driver traveled at 49.5 miles an hour on the road, whereas by 2017 the average speed of vehicles on the road was 58 miles per hour. The speed limit on the road is 45 miles per hour.

“Adams Road is a beautiful little scenic, rural county highway, and after Kia [Motors Manufacturing Georgia] was built it suddenly became more of a thoroughfare,” Emery said.  “The reason for that is that anyone traveling from the south — like from the Columbus area — toward Kia, if they map their route for the best route to travel to anywhere in the Kia industrial park area, the most direct route they’ll find is down our beautiful scenic rural county road, Adams Road.”

Emery said that the county began receiving complaints about increased traffic, speeding and accidents on Adams Road after KMMG opened.  In response, TCSO and GSP both made a point of patrolling the area, and Emery said the patrol has resulted in fewer drivers speeding through the area.

“When you see a car come around a curve [on Adams Road], it really looks like it is flying, so we had to really get out there and start doing something to be able to protect these people,” Major Keith Flory said. “We sent patrol units out there. We sent some of our traffic units out there, and they have seen that there was a problem.”

Flory said that educating drivers who regularly use Adams Road and continuing to enforce the speed limit will continue to be an important part of keeping the road safe. Additionally, the roads and engineering department placed signage in the area to ensure that drivers know what the speed limit is and how fast they are driving.

“One idea that we decided to try about six months ago was placing the radar feedback speed limit signs [on Adams Road],” Emery said. “It has the speed limit sign, the 45 miles per hour speed limit sign, and right above that we display for the driver to see the speed that they are actually traveling at that point in time. That number will change as they pass this sign if their speed changes, and they can see exactly how fast they are driving.”

Emery said signs like the two signs placed on Adams Road, which cost $3,500 apiece, have proven effective in discouraging drivers from speeding. Emery said that since the signs were installed, the average speed of vehicles on the road has gone down to 40.5 miles per hour and only 2.3 percent of vehicles now travel faster than the tolerated range.

Emery said that while the county did look into reducing the speed limit, staff recommended no change to the speed limit after a study was complete. County Commission Chairman Patrick Crews said that he thought the signs were a good investment for the county because of the impact that it has had on citizens.