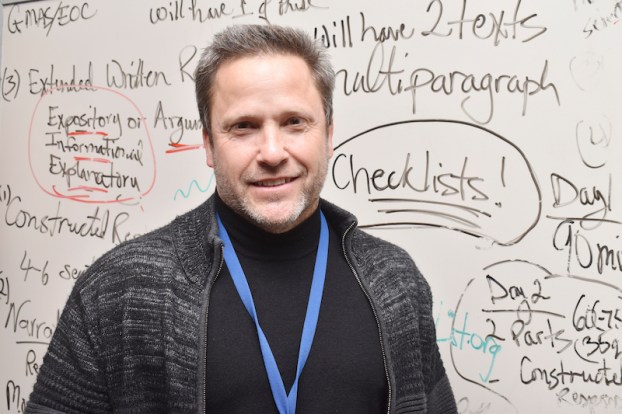 John Hardie, a 1986 graduate of LaGrange High School, has returned to his alma mater to teach and coach. Hardie teaches American Literature and Composition, and also coaches football and baseball at the school. - Gabrielle Jansen

When he graduated from LaGrange High School in 1986, John Hardie never imagined that he would eventually return to teach and coach at his alma mater.

“I love being back in LaGrange” said Hardie, who is in the midst of his first year teaching at LHS. “It’s a great place. I love the people and I love the students. Teaching is a great thing to do if you love young people.”

Athletics were a big part of Hardie’s high school life, and he said the impact coaches had on him played a role in why he decided to return to LaGrange.

Hardie continued to play baseball at the University of Alabama while receiving his undergraduate degree, and it was there that he met his wife of 26 years, Adrienne. They now have three adult children.

Hardie decided to go into the ministry following college. He was with Athletes in Action for 15 years, and he even spent a year overseas as a missionary in Prague, Czechoslovakia.

He received his master’s degree from Yale, where he spent seven years as a campus minister. Later, he received his Ph.D. from Princeton, where he also taught for a year. He said that his year of teaching college students made him want to continue teaching.

“When I taught in 2015 at Princeton, I started thinking about [ministry].” Hardie said. “Loving on people is really the foundational calling to be a minister or a pastor. Teaching is just another venue for me to love on people.”

Hardie said that both of his parents passed away in May 2018, and that during that time of grieving in his life, he needed to do something where he was focused on other people.

“I needed something to do in order to deal with the loss and the whole grieving process,” he said.

Hardie was invited to go to LHS and assist with football practices during the summer. This led to him being offered a job teaching and coaching at LHS. He now teaches American Literature and Composition to juniors and coaches football and baseball.

During his time at Yale and Princeton, Hardie learned that ideas matter, and that the ability to think critically is vitally important. He attributes these realizations to the extraordinary professors he had and the effect they had on him.

Through his own teaching and coaching, Hardie also tries to grow his students through emphasizing self-assessments and self-awareness.

“A lot of what I want to do in the classroom is to engender internal motivation,” Hardie said. “I have students grade themselves a lot. I almost always have assignments where I ask students to assess themselves. Because at the end of the day, the whole grading process is an external motivation.”

Hardie compared receiving a grade to the scoreboard at an athletic event.

Hardie admitted that his first year of teaching in LaGrange has definitely been a challenge, but that he has a specific desire to build into and invest in young men and women as emerging leaders.

“LaGrange High School is supposed to be about young people. As long as that’s the focus, things fall into place,” Hardie said. “I definitely never thought I’d end up teaching and coaching back at LHS. It’s kind of fun now to look back on the journey.”

On Tuesday, County Engineer James Emery discussed some of the actions that the Troup County Roads and Engineering Department, the... read more