Giving the Super Bowl a Thumbs Up at Great Wolf 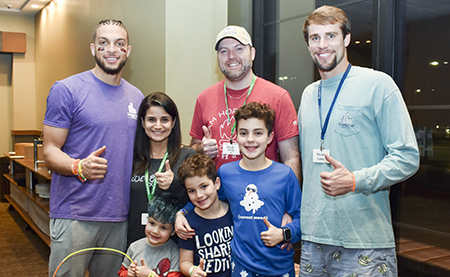 About 700 people gathered in the conference room at Great Wolf Lodge on Sunday to watch the biggest football game of the year and spend time with people who understand what it’s like to be part of a family dealing with cancer.

The Super Bowl party was hosted by The Thumbs Up Foundation, a group that brings together families dealing with cancer. The foundation provides an opportunity for these families to create priceless memories — aided by a support network of volunteers, organizers and other families facing the same challenges. In addition to a giant Super Bowl party — complete with food and games — the families also enjoyed time in the water park during the weekend.

“To see the families and how it impacts just the two that we’ve worked with [as hosts] — to try to sit and find out their cancer story and the journey that they’ve had to go through [is moving],” said Alis Albritton, a local volunteer. “It is such a unique way to serve somebody, and being a Christian, I can’t think of a better way to serve someone and to find out there is a Lord who loves you. He cares for you even in the midst of when you are really low, and you aren’t sure if you are going to make it.”

The Thumbs Up Foundation was founded by Miles and Sharon Coker and “Aunt” Marybeth Cook to honor Miles and Sharon’s son, Keaton, who was known for his good attitude and signature thumbs up, even in the face of cancer.

“Keaton was diagnosed with cancer in 2012,” Miles Coker said. “He went through a little over a two-year journey from the time he was 16 to 18 [years old], and we went on a Make-A-Wish trip the spring of his 18th year of being alive. He had just graduated from high school, and he passed away that July 15, 2014.”

Coker said that Keaton wanted to be a Christian motivational speaker when he grew up because he felt like he had a story to tell. While Keaton did not personally get to share his story, his story has now been shared a multitude of times through the Thumbs Up Mission.

“I told my wife, ‘At some point, I want to do some type of ministry to honor how Keaton viewed God and his relationship to God,’” Coker said. “So, that is what started it.”

The foundation’s concept began when the Cokers met a woman facing the same form of brain cancer that Keaton had faced.

“Keaton had saved about $5,800 in his life savings,” Coker said. “I met a family and she found out that she was battling the same kind of brain cancer that he had right when he passed away. I didn’t know her, but we had a common friend. My friend asked if I would call and talk to her, and she just said that she needed all the help she could get.”

Coker said that the woman, Ashlee Keys, reminded him of Keaton, so he decided to do what he could to help make sure she received good medical care. As he got to know her, Coker found that there was more that he wanted to do though.

“I said, ‘I know what I want to do with Keaton’s $5,800. I want to send them on a trip, like a Disney Cruise,’” Coker said. “So, November of 2014, we sent them on a Disney Cruise, and that was our first unofficial Thumbs Up, because we weren’t even incorporated at that point.”

Coker said that in 2015, Thumbs Up set a goal to host trips for five families. However, God had other plans for the new foundation.

“It did not work out that way,” Coker said. “We ended up doing 50 families because God blessed us with a lot of money from the word ‘go’ that we didn’t know was coming.”

Cook said that Thumbs Up emphasizes the fact that cancer effects the entire family, since family members can feel the strain of ongoing cancer treatments and missed baseball games just as much as the person battling the disease.

“Infusing hope is part of our tag line, and that is what is in short supply when they arrive on the first day of the retreat,” Cook said. “They leave with a completely different demeanor.”

Participants said that the community is the reason for that change as much as the retreat itself.

“It allows kids to feel normal, because my kids are treated different at school,” said Keys, who volunteers at the retreats. “They know their mama had cancer, and so here, these kids know how to treat [each other] and blend in and help them.”

Cook said that the retreats hit the reset button for families, but the families in the program aren’t the only ones impacted by each of the Thumbs Up retreats.

“A ton of our volunteers are people who are battling cancer themselves, went on a retreat, and they come back to volunteer for us,” Coker said.

Coker said that he thought what Thumbs Up has become would make Keaton happy.

“From the beginning, we said every step of the way we were going to ask, what would Keaton do?” Coker said. “I feel like he would not only love it — I think it would be beyond his wildest dreams. It makes me thankful every time I see something new. I think, ‘he would love this.’”

Thumbs Up has previously hosted retreats at Lake Lanier Islands, Young Life’s SharpTop Cove and Young Life’s Carolina Point. This was the group’s first retreat at Great Wolf Lodge, but Coker said that he hoped to return.

To learn more about Thumbs Up, visit Thumbsupmission.org.

Local students to be featured in Super Bowl commercial