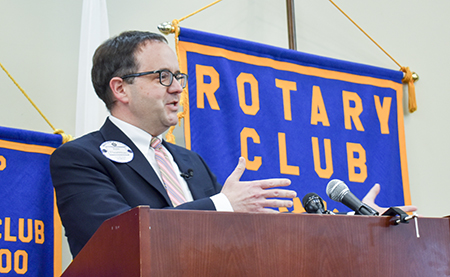 LaGrange Mayor Jim Thornton delivers his State of the City adress at the LaGrange Rotary Club on Wednesday. (Alicia B. Hill | Daily News)

As part of the address, which was held during Wednesday’s Rotary Club meeting, Thornton called on the community to step forward and take ownership of the city and be part of the changes that they hope to see in LaGrange.

“I do believe that we need to invest more time and energy into leadership development,” Thornton said. “That is why the city has started new programs like LaGrange 101 and the youth council, but the community members need to make an intentional effort to participate and become more engaged. We are where we are today because of great leadership in the past, but we need to encourage our residents to be more engaged in their local community.”

While Thornton personally serves on numerous boards, he said that making a decision at a table isn’t enough.

“That doesn’t just mean running for public office,” Thornton said. “It doesn’t just mean serving on boards. It means rolling up the shirt sleeves and doing the hard work of community building, beautification and improvement. It means being willing to invest time and energy in worthwhile projects.”

Curtis Brown Jr. provided an introduction for Thornton’s speech and talked about some of the ways that Thornton has been an active participant in programs to improve the community, including some that Brown organized.

“We are excited about what has been here and equally excited about what is coming next,” Brown said. “I’ve had the opportunity to work with Mayor Thornton on several projects and continue to be awed by his visionary leadership and ability to balance statewide and regional concerns while advocating passionately for LaGrange and Troup County.”

Thornton also discussed some of the economic development in LaGrange, but he was quick to note that, while the city does everything it can to work with new and existing businesses, the decision to open a business in LaGrange is a private business decision. He said that because the decision is made based on where a business believes it will be successful, he felt that the city has been successful in creating a positive environment for businesses.

“With dozens of companies investing millions of dollars, now in excess of an aggregate [$1.35 billion since 2016], I think the evidence is pretty clear,” Thornton said.

“LaGrange is a great place to invest. That is great for our city’s sustainable and prosperous future. Like other communities across the state and the nation, we have challenges from time to time with public safety, housing, workforce, education and the like, but the proof to me that LaGrange is in a better position than most on these issues is the level of corporate investment.”

Additionally, Thornton outlined some of the steps the city has taken to ensure that the LaGrange Police Department is able to do its job, like funding cameras and tools to help LPD track online leads. He pointed to a decrease in Part 1 crimes, or violent crimes, in recent years, while admitting that there is still room for improvement.

“Sometimes I wish you had a way to predict where and when a crime would occur before it happens,” Thornton said. “Of course, such a device doesn’t exist, but the key is for our police department to always make its presence known in the community, and when a crime does occur, to respond quickly and effectively. The LaGrange Police Department does just that.”

During a recent city council work session, Thornton and council members received updates on programs that the LPD organizes. A number of community programs that receive support from the LPD were also discussed during the work session.

“It is important to have those relationships and trust, so when a bad event occurs, the community will help the police solve the crime and bring healing and justice to the families,” Thornton said. “When it comes to the law enforcement side of public safety, we’d be hard pressed to find a more responsive police department than LaGrange.”

Ultimately, Thornton attributed the state of the city to everyone who has worked to make LaGrange a better place to live and work.

“The state of our city is already strong, and it is getting better all the time,” Thornton said. “The strength of our city that we enjoy today — and sometimes that we even take for granted — is a result of decades of good leadership, sound management and a collaborative spirit between the city, the county, the business community, our philanthropic partners and our residents.”