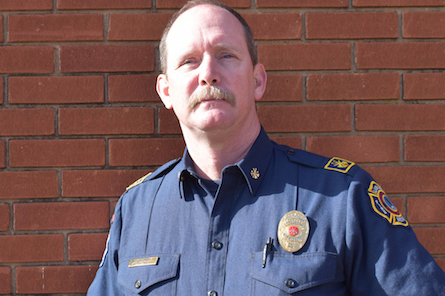 Chad Dallas of the LaGrange Fire Department has been with the LFD for 22 years, and is now one of three deputy chief’s within the department. - Baker Ellis

A 30-year tenure in any industry does not happen by accident, instead is the result of a combination of competence and personal enjoyment in the work being done. Dallas has both, and maintains the service that the fire department provides to the public is the reason he has never deviated from his career path.

“The biggest thing is just being able to help people who need help,” Dallas said. “Continually serving the public, to provide help to people. When people call 9-1-1, their world is turned upside down, for whatever reason that may be. We’re there to bring calm to the situation and a solution to the situation.”

Dallas was named a deputy chief in January of 2018, and is now one of three who hold that title. He is in charge of the department’s Third Battalion shift, which currently has 16 firefighters on staff. LaGrange is in the process of finalizing the city’s fifth fire station, which is projected to be complete in May, at which point the number of firefighters under Dallas’ command will jump to 19.

The LaGrange Fire Department is one of only 10 fire departments in the state of Georgia that has received accreditation from the Commission of Fire Accreditation International, which it earned in 2018. As a factor in that accreditation process, the LFD must keep response times at or below five minutes from when a 9-1-1 call is placed. The addition of a fifth fire station in the city will help the LFD maintain that quick response time.

“As the city expands and incorporates more territory, it puts a bigger strain on us to maintain those response times,” Dallas said. “This fifth station is being put in to help with that. The city [council] has been real supportive of us the whole time I’ve been here, and this is what we need.”

Though Dallas’ primary responsibility now as a deputy chief is people management and administration, he still finds time to respond to emergency calls, when he deems it necessary.  Those calls that the LFD respond to are also not limited to fires, but are very widespread and diverse.

“We are a First Responder EMS service, all of our trucks are Advanced Life Support trucks with paramedics on them,” Dallas said. “We have a list of calls we go on as far as heart attacks, strokes, chest pains, etc. There is very little we don’t respond to.”