Troup March for Babies kicks off 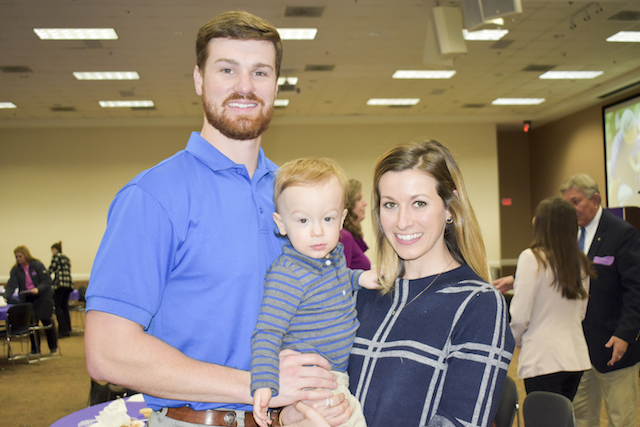 From left: James, Jay and Stephanie Jackson at Troup March for Babies kickoff luncheon on Friday.

The Troup March for Babies held its kickoff luncheon on Friday. The event marks the official beginning of fundraising efforts for the walk, which will take place in May.

As in previous years, the kickoff resulted in more than a few misty eyes, as local families talked about their experiences with premature birth and how the research funded by March of Dimes has helped their families.

This year’s ambassador family was Stephanie, James and Jay Jackson. Stephanie shared the story of Jay’s birth at the event, while baby Jay, now a 1-year-old, babbled happily in his father’s arms.

“Jay was born at 25 weeks,” Stephanie Jackson said. “It is a complete mystery as to why Jay was born at 25 weeks. I had no idea. I didn’t have any conditions. I didn’t have any medical issues during my pregnancy. I had a very healthy pregnancy, but all of a sudden in the middle of the night, I went into labor. We went to the hospital here in LaGrange, and by the time we got to the hospital, I was already so far along that they knew they would not be able to stop the labor.”

Stephanie said she received a shot to help develop Jay’s lungs, which was created as a result of March of Dimes research. However, that medicine only had a short time to work, because 10 hours later Jay Jackson was born weighing 2 pounds, 5 ounces.

“They gave him a 50 percent chance of survival, but there was never really a doubt in my mind that he would survive,” Stephanie said. “He lost weight. He got down to about 1 pound 10 ounces while in the NICU, but then he suddenly started going back up to his birth weight.”

Stephanie said the hardest part of the experience was the nearly two months after she had been discharged from the hospital, while Jay remained in the Newborn Intensive Care Unit.

Jay was discharged December 3 when he weighed 4 pounds, 6 ounces. His due date had been on January 11.

“If it weren’t for the research that is being done, families like ours may not have had such a successful story,” Stephanie said. “Still today, there are babies that don’t graduate from the NICU, and so this research is so important for families like ours and families to come.”

According to March of Dimes, funds raised by events like March for Babies helps give 4 million babies born each year “the best possible start.” Last year, March for Babies raised nearly $65 million in 300 communities across the country. Those funds go toward researching the cause of premature birth and discovering ways to help babies like Jay.

“March of Dimes has touched lives for over 81 years now, including all of us here today,” said Carla Starling, the development manager for March of Dimes Southern Georgia market. “From funding the research that developed both the Salk and Sabin vaccines and the PKU screening, to treatments for our babies who are [born] too soon or too sick.”

Many of those attending the kickoff have previously seen the impact that the March for Babies has on babies that are born prematurely, and that personal experience drove them to encourage one another in their fundraising efforts.

“We spent time at Northside Hospital,” said Matt Mallory, the emcee for the kickoff. “[The story of my twin girls] was a happy and healthy story, unlike a lot of families that we were around during that time, [and] my son was premature. So, this is personal.”

The Troup March for Babies will take place on Saturday, May 4 at Hollis Hand Elementary School. Registration will begin at 8:30 a.m. The walk will begin at 10 a.m. To learn more about the event, visit Marchforbabies.org.