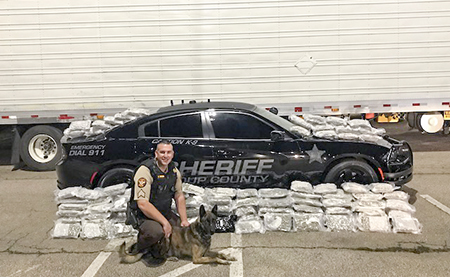 According to the Troup County Sheriff’s Office, Biko was a Dutch Shepherd trained in narcotics detection, apprehension and tracking. In January 2010, when he was approximately 2 years old, Biko began working with his handler, Lt. Nathan Taylor. They completed a 13-week handler course, allowing Biko to go into service.

According to TCSO, Biko was responsible for the apprehension of numerous suspects, recovery of lost and missing persons and the seizure of millions of dollars of illegal narcotics and drug proceeds.

Toward the end of his career, Bikko began suffering from multiple medical issues, and he retired from active service on Jan. 18. On Friday, Biko passed away at Taylor’s home.

“We are certainly grateful for the over 8 years of service Biko gave to the Troup County Sheriff’s Office assisting in the fight against illegal drugs and the recovery of lost and missing persons,” Sheriff James Woodruff said. “He will be missed by all.”

During his 8-year career with TCSO, Biko helped solve countless cases, and he will leave big shoes to fill for the sheriff’s office’s remaining K9, Stella.

“I would certainly say without him, we probably would not have gotten all of those drugs off the street,” Sgt. Stewart Smith said.

The azaleas aren’t quite ready to bloom yet, but on Sunday, LaGrange’s first signs of the approaching spring will be... read more