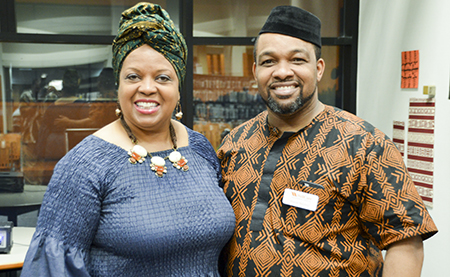 The LaGrange Memorial Library hosted a well-attended African American Cultural Celebration on Thursday night that saw performances, storytelling and singing from groups and individuals both local and visiting.

The evening started when Columbus resident Brandon Sparks gave an acapella rendition of ‘Glory, Glory, Hallelujah’ and was quickly joined by the crowd as he sang.

“Before we had the drums and the organs and pianos, all we had were our feet and our hands, we’re going to sing this old Baptist-gospel style,” Sparks said before singing.

The crowd then heard from Nigerian-raised Marcel Ndubisi, who discussed growing up in Africa, and read a passage from his book, ‘The Predicaments of the Black Man.’ Born in New York City, Ndubisi moved with his family to Nigeria before the age of three, and spent his childhood there.

“People always ask me, ‘what was it like growing up in Africa?’” Ndubisi said, smiling.

“I always say, ‘you’re talking about a whole continent, I only grew up in Nigeria.’”

Ndubisi grew up in a college town, his father was a professor, and he grew up with a firm understanding of the importance of education.

This importance was further instilled into Ndubisi’s understanding of the world in light of the rampant corruption he saw.

“Nigeria is probably one of the most corrupt countries in the world,” Ndubisi said. “If a police officer stops you at 11 o’clock at night, you’re coming out of your pocket [to pay them]. I don’t care whether you’re right or wrong. [But], when police officers saw that my dad was educated, one of two things would happen. They would either become afraid or simply let him go.”

LaGrange resident Connie Askew followed Ndubisi and told a gripping tale involving a rabbit, snake and possum. The take-home message from the story was to “never trouble trouble, until trouble troubles you.”

The keynote speaker for the evening was Dr. Tara Scott co-founder of Family and Children Educational Services, a nonprofit organization that provides educational, social and community programs for children in Troup County as well as Chambers County, Alabama. Scott spoke to the history of Black History Month, the need to celebrate the culture and heritage of African Americans and the importance of community-wide investment in the upbringing of the next generation.

“Let us all prove our worth, our dignity and respect by celebrating who we are and recognizing the dominant force of unity,” Scott said. “It takes all of us, a change of thought, a change of mind and a change in attitude to attack life with a change of heart.”

The event also saw singing performances from the girls and boys step teams from LaGrange High School, as well as a performance from the movie “Selma” by the young singing group known as The Lewis Kids.

By BEN NADLER Associated Press ATLANTA — A federal labor union says some of its members found what it called... read more