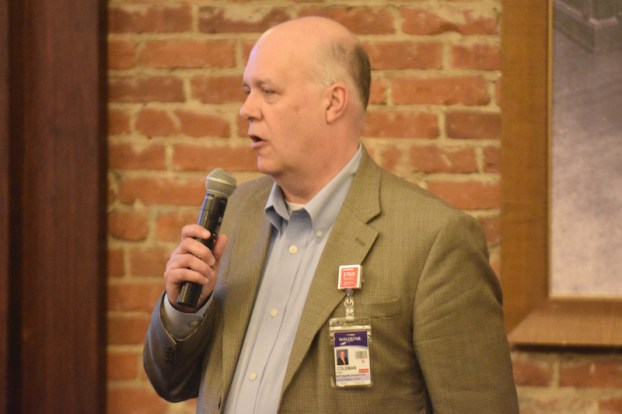 Coleman Foss, newly-appointed CEO of WellStar West Georgia Medical Center, spoke through a case of laryngitis to the packed crowd at the LaGrange-Troup County Chamber of Commerce Early Bird Breakfast on Tuesday morning, giving an update on the state of affairs at the hospital. Foss, who came to WellStar from his position as CEO of Tennova Healthcare-Cleveland, in Cleveland, Tennessee, has replaced longtime CEO Jerry Fulks, and shared his belief that WellStar West Georgia is one of the premier healthcare providers in the state.

“This is a great hospital,” Foss said of WellStar. “It has won many, many awards for its quality, there is absolute dedication of the team members who are there, it is ranked as one of the top 100 hospitals in the nation by Truven [Health Analytics] and has been named the top hospital in the state of Georgia [by Georgia Trend Magazine].”

Foss also shared some of the challenges local hospitals face across the country, as well as his belief that the talent and quality of employees working at WellStar will ensure the hospital’s longevity.

“It is difficult for sole community providers to exist,” Foss said. “There are a number of reasons for this from managed care contracts, supplies, physician recruiting, you name it. It’s a difficult world out there for hospitals. The people who make up the team at WellStar West Georgia are outstanding. I’ve been very impressed with their work ethic and quality. There is an absolute dedication to continually raising the bar for healthcare services in this community.”

While the hospital puts a premium on service, it is also large. WellStar performed approximately 4,300 surgeries in 2018, along with 1,200 ICU admissions, 7,700 total admissions and 58,000 total ER visits, which qualify the hospital as a large hospital, according to Foss.

“Any time you get above about 50,000 visits, you truly have a sizeable hospital,” Foss said.

Foss also touched on the updates to the hospital’s cancer center. The hospital is currently in the midst of a $28 million renovation project to the Enoch Callaway Cancer Center, and Foss thanked both the Callaway Foundation and Kia for donations to the hospital related to this project. The Callaway Foundation has pledged $5 million to go toward the renovation cost of the cancer center, while Kia has pledged $75,000 to the hospital as well. The donation includes the purchase of a Kia Sorento and maintenance, alongside insurance for a driver to transport patients to and from the cancer center who are unable to drive themselves.

“That is just how the whole community works together to raise the bar for healthcare,” Foss said.

In looking toward the future, Foss said the hospital will look to hire 26-27 new physicians, to replace physicians who will be retiring as well as increase the services offered in already-existing departments, ensuring the hospital stays well-stocked with quality physicians.

“We’ve hit that point in the history of the hospital where we have a number of physicians who will be retiring, so over the next three years we have the goal to bring in 26-27 new physicians, many in specialties we already have, but some in specialties we are either very slim in or do not have.”

Foss ended his speech with a charge, asking the community to let the hospital know what it wants and needs from the hospital.

“We are here to serve you,” Foss said. “We are very much servant-leadership minded.”

Council talks about litter at lake

On Tuesday, the LaGrange City Council heard from Joey Mines, a local fisherman who has been featured in magazines and... read more