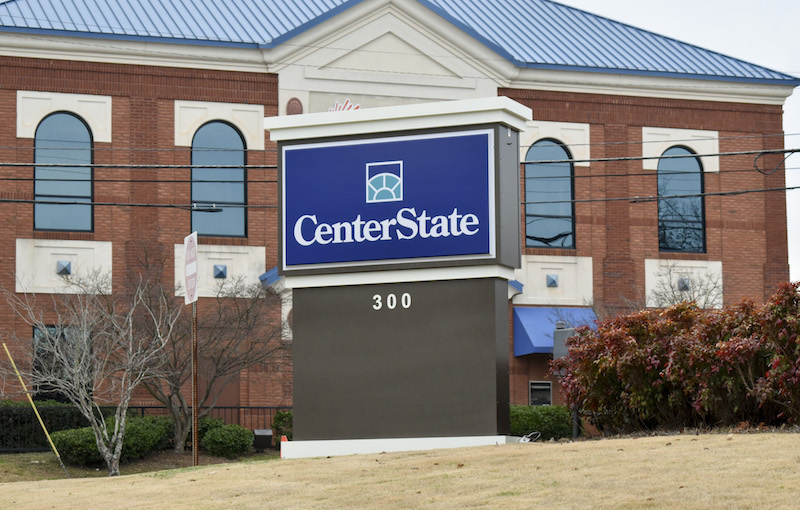 The signage in front of the old CharterBank locations have been upgraded to reflect the new CenterState name. CharterBank was officially acquired as of Sept. 1, however the signage and computer systems are just now being updated. - Alicia B. Hill

CharterBank was officially acquired by CenterState Bank in September, but many customers may just now be noticing the change.

The signs at local bank locations have been changed out, with the familiar CharterBank logo being transitioned to the image for CenterState. The bank’s computer systems are being changed over this weekend.

“We have been CenterState since Sept. 1, but because of the way things work, we are just changing over the computer systems over this long holiday weekend,” said Lee Washam, regional president of Alabama and Georgia for CenterState Bank. “We are changing the signs and marketing material at the same time.”

Washam said internet banking will be down from midnight Friday until some point on Saturday.

However, he said most of the other changes do not affect customers. CharterBank customers will still be able to use their current checks, debit cards and ATMs.

“For the most part, it’s going to be pretty transparent. They can continue to use their same checks they use now. They will have the same ATMs and their debit cards will continue to work,” Washam said. “Even though it says CharterBank on it, they can still use it until we send them a new debit card.”

One change for customers is that they’ll have to go to CenterStatebank.com to access their accounts. They will also need to download the CenterState Bank app on their smartphone, if they want to use mobile banking services.

“They will have to download the CenterState mobile app on Saturday, but it will function very similar to the CharterBank app,” Washam said.

Washam said the people and faces customers see will still be the same.

“I think the biggest things for our clients, readers and local community is we have all the same people we are used to dealing with at the branch level and at the bank management level from a customer-facing standpoint,” Washam said. “And we are really excited to be a partner with a little bit larger organization that allows us access to some additional technology.”

CenterState Bank Corporation is based out of Winter Haven, Florida. According to a press release from April 2018 announcing the acquisition, CharterBank was founded in West Point in 1954 and was the leading community bank by deposit market share in the West Point and LaGrange markets and the third largest in Auburn.

At the time of the acquisition, CharterBank had 22 locations in Alabama, Florida and Georgia, including three in LaGrange and one in West Point.

Washam said if there are any technical issues during the transition, customers can call CenterState’s call center at (855) 863-2265.