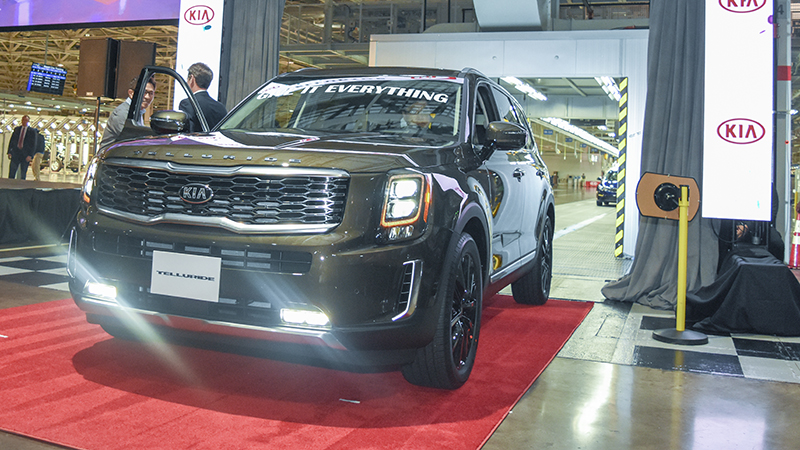 The Telluride was debuted last year during New York Fashion Week and was featured in Kia’s Super Bowl commercial, but Friday was the first time one of the vehicles officially came off the production line. The vehicle is a 7-seat mid-size SUV and is the biggest vehicle Kia has ever produced.

“The vehicles assembled in West Point, Georgia account for almost 40 percent of all Kia sales in the United States and with the addition of the exclusive 2020 Kia Telluride, KMMG will continue to cement itself as Kia’s premiere U.S. facility,” said KMMG Chief Administrative Officer Stuart Countess.

The Telluride will join the Sorento and Optima as vehicles produced in West Point. KMMG will celebrate 10 years in West Point in November and will also produce its 3 millionth vehicle this year.

“Just 12 years ago, the location where we are standing today was an empty field,” said Kia Motors North America President and CEO SeungKyu (Sean) Yoon. “Now, with another major milestone just minutes away, it is the site of great triumphs. This is where the Sorento and Optima became the talk of the industry for their quality, safety and design. This is where the Telluride will bring us great honor well into the future.”

Gov. Brian Kemp also spoke during the ceremony, talking about the impact Kia has had on the state of Georgia overall. KMMG serves as the biggest employer in Troup County and has created more than 15,000 jobs.

“This company’s corporate footprint represents a $3.7 billion investment here in our great state and the vehicles built in this plant — the Sorento and Optima — are the brand’s top two selling models in the entire United States,” Kemp said.

“And right here in West Point, KMMG manufactures top-notch products for customers all across our country.”

Countess said KMMG will produce a minimum of 50,000 Tellurides a year.

“Depending on market demand, that number could go up,” he said.

According to the Kia website, the 2020 Telluride will have a starting price of $31,690. For anyone wanting to see the new vehicle, Kia of LaGrange had a 2020 Telluride on the lot on Friday afternoon.

Although Kemp and the Telluride were supposed to be the talk of the ceremony, 10-year-old Korbin Pope might have been the biggest star. Pope, from Huguley, Alabama, was the face of Kia’s advertising campaign and posed for dozens of pictures on Friday.

Once Kemp finished speaking, he stood by Pope, shook his hand and took pictures.

Countess said the commercial did a great job recognizing the work KMMG employees do every day.

“I think that commercial says a lot about what goes on in this community,” Countess said. “We are hard-working, and we intend to be winners at what we do.”

Countess said the Telluride will play a big part in Kia’s future.

“This car also helps to set the stage for what could happen in the next 10 years,” Countess said. “That’s how far ahead we’re looking.”