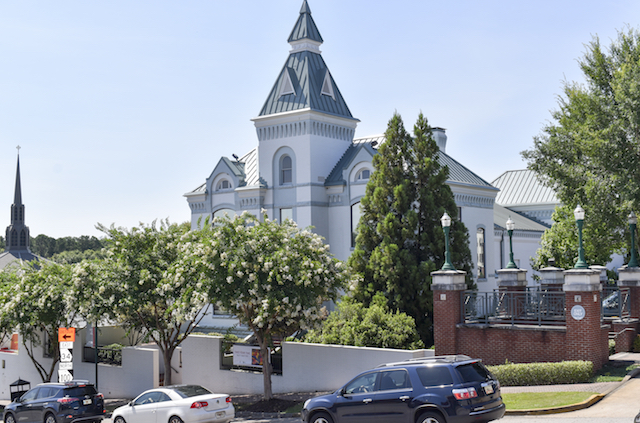 On Tuesday, the LaGrange City Council received an update from the LaGrange Art Museum. The city provides some funding to the art museum in order to offset the cost of utilities in the 127-year-old building, which runs on donations.

“I just wanted to tell city council thank you for the money that you have approved in your budget every year for I can’t even remember how many years,” said Laura Jennings, the executive director of the LaGrange Art Museum. “Jeff Lukken approved giving a donation to the museum every month that offsets the cost of utilities.”

Now in its 55th year, LAM has taken on a wide variety of projects in the last year alone. It hosts Super Saturdays, a free monthly hands-on art workshop for children that is sponsored by the Junior Service League. It hosts paid art classes, serves as the home base for the Visual Artists Alliance of LaGrange, works with interns from local colleges and featured six distinct exhibits during 2018.

Additionally, in June 2018, LAM coordinated with New York sculptor Bob Clyatt to create a public art project and invited the community to take part. The museum reported a record of 162 summer campers during the summer. It also reported 6,728 visitors and participants in outreach projects.

The museum also partnered with the Troup County School System to provide a field trip for 250 summer school participants ages 5 to 8-years-old.

“We work closely with the Troup County School System, and art education is really what we are about,” Jennings said. “It is not just art. It is literacy combined with art — talking to children and developing their ability to communicate. [We] say, ‘What do you see in this? What do you see about that? How do you feel about it?’ We get them to communicate about art.”

According to the museum’s annual report, it plans to continue providing resources to meet the needs of area educators and focusing on learning for gallery visitors of all ages. Jennings said that art education can encourage creative problem solving, and the report touted it as part of workforce development.

“As we also know, as the community grows, it needs to be a creative community,” Jennings said. “It attracts people and problem solving comes out of art.”

Council Member Tom Gore noted that LAM has featured many local artists over the years, including Annie Greene and John Lawrence. Gore expressed a desire to see additional locals recognized at the museum.

LAM also hosts an annual exhibition featuring the Visual Artists Alliance of LaGrange — which is made up of local artists — and the Creative Youth Art League —which features art students of all ages from Troup and surrounding counties — in addition to numerous shows featuring work from local collectors.

Jennings also took a moment to speak as a longtime resident of LaGrange and to urge the council to invest in sidewalks in areas where residents are often seen walking sidewalks in disrepair or beside the road.

“One out of every five in our community is below the poverty level, and they need to be able to walk to the stores that I see them walking to every day,” Jennings said. “It is truly deplorable what I see. People who are not walking for exercise but truly walking because they need to buy groceries, and they are carrying heavy bags on very poor sidewalks. Then in many places, there are no sidewalks whatsoever.”

She said that while The Thread is great, sidewalks that are purely utilitarian are also important.

Council Member Nathan Gaskin asked if LAM would be willing to help organize installation art near sidewalks and improve those areas. Jennings said that the museum loves installation art and pointed to LAM’s coordination with the city to facilitate installation of sculptures by Chuck Moore around the city.

LaGrange Mayor Jim Thornton said that the city would look at the sidewalks in the areas that Jennings mentioned specifically, while noting that some sidewalk projects are currently underway. Council Member Jim Arrington said that he had seen trails left by foot traffic beside some city roads, which seemed to indicate a need for sidewalks in those locations.