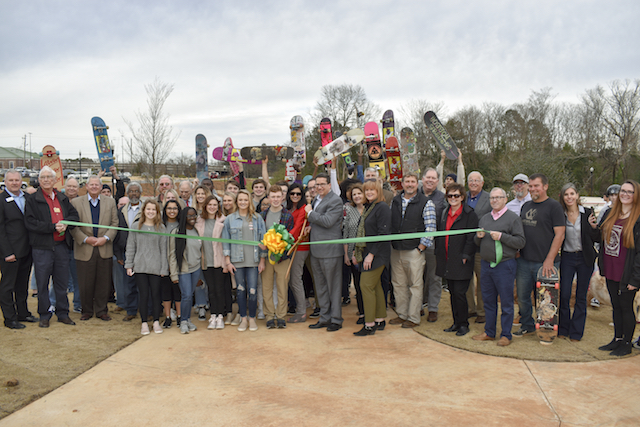 Members of the LaGrange City Council, Callaway Foundation, local skateboarders and many others gathered to celebrate the opening of Southbend Park on Thursday afternoon. - Alicia B. Hill

Even before the ribbon was cut on Southbend Park on Thursday, the new park was filled with children playing on swings, dogs playing with their owners in the dog park and skateboarders eagerly eyeing the long-awaited skate plaza.

The plan for Southbend Park was first presented in a LaGrange City Council work session in February 2018, and it has taken various groups working together to make the park a place that community leaders hope will meet the needs of citizens for years to come. From meetings with the local skateboarding community to planning sessions with downtown stakeholders, everyone involved in the project said it was a team effort.

“This project is the result of a partnership between the City of LaGrange and the Callaway Foundation to redevelop what was the old Daniel Lumber Supply Company’s 5 acres to create this public space that combines the pavilion, the open green, this playground, the dog park and the Tony Hawk Foundation funded skate park,” City Planner Leigh Threadgill said.

The rainy winter delayed the park’s construction, but by Thursday, families were already enjoying the largely-completed park, even as the community partners who made it happen gathered for the official ribbon cutting. LaGrange Mayor Jim Thornton said he heard about people visiting the park weeks before it was officially complete.

“The spaces are being used,” Thornton said. “You cannot go to any of these park spaces or Thread trails or any of these other amenities and not see them in use. The transformation at Granger Park alone has been phenomenal, and that is going to continue here at Southbend Park. This is our next place that we are going to start seeing a lot of activity.”

Thornton emphasized the importance of “passive parks,” which include any park with greenspaces, playgrounds or the new amenities like the skate park and dog park that are within Southbend Park. The park is also part of a plan by the city and the Callaway Foundation to revitalize the downtown area.

“Those of us have been here for 10, 15, 20 years or more will remember what our downtown was like, and it was a fine downtown. It was OK, but thanks to the partnership between our city and the vision of our trustees and other community leaders, our downtown is radically different then it was back then,” Callaway Foundation President Tripp Penn said.

The Callaway Foundation alone has invested roughly $60 million in downtown LaGrange since the early 2000s, and it funded the majority of the park project. The city has overseen the construction of the skate plaza and the ongoing construction of segments of The Thread trail, which will eventually connect Southbend Park to other parts of the community, providing easy access to the amenities the park offers.

Thornton credited the vision and investment of the Callaway Foundation in the community with responsibility for the transformation of downtown LaGrange in the last decade.

“It is the right time, and it is the right use, and it is the right space for transforming the south side of downtown LaGrange,” Thornton said. “The transformation that has occurred over the last 10 years in our downtown area — you cannot see it and not recognize it and be in awe of it,” Thornton said. “This has not happened in every downtown, in every small city across our state, but from Sweetland Amphitheatre to the Courtyard by Marriott to the Del’avant to Wild Leap Brew Co. and now here at Southbend Park, the transformation has truly been breathtaking.”

He also touched on some of the city’s other planned park projects.

“Parks have been a big deal to us at the city for the last couple of years,” Thornton said. “We have made substantial investments of community resources in park space, not just downtown, but throughout our community — investments in Granger Park, Eastside Park, Calumet Park, certainly the development of The Thread — which has attracted a lot of attention and a lot of investment.”

While the majority of construction was complete by the time of the ribbon cutting, officials said some features will be added to the park in the coming weeks.

The first bench in the park was purchased by Barry and Kathy Smith in honor of their daughter, Meghann Smith, who loved dogs. The bench is located next to the new dog park.