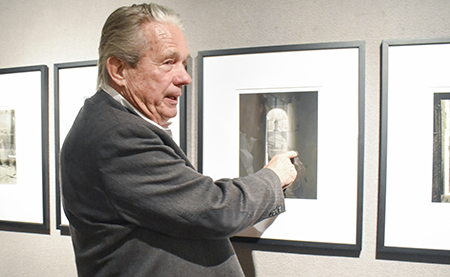 John Lawrence talks about one of his photographs during the opening of his show at the LaGrange Art Museum. (Alicia B. Hill | Daily News)

A photographic story lined the walls of the LaGrange Art Museum on Friday, as friends, colleagues and art lovers took a moment to view the world through John Lawrence’s camera lens.

His earliest work on display is a photograph from the World Championship Tobacco Spitting contest that was held in Raleigh, Mississippi in 1967. Photographs taken shortly before the exhibit opened were also displayed in the order that Lawrence felt were the right locations in the museum.

“What is it like seeing 50 years of your work? Have you ever had the experience where you see your life flashing in front of your eyes like you’ve been hit on the head or something?” Lawrence joked. “I feel old. That’s what it makes me feel.”

Lawrence, a professor of art and design at LaGrange College, is the director of the Lamar Dodd Art Center of LaGrange College, where he joined the faculty in 1970. In his years of teaching and taking photographs, Lawrence said that his skills have improved, and he has seen his subject matter change over the years as well.

“My interest and subject matter changed [over the years],” Lawrence said. “These are the first photographs I ever made [near the entrance to the exhibit], and it is ridiculous. I didn’t even know what I was doing. I was photographing a tobacco spitting contest. My more recent work is more in depth because I’ve done all the reading, and I’m interested in the research. I’m not just interested in photographing places as much as I am interested in why they are important.”

He said that shift in focus occurred because of a realization of the importance of places in a person’s life.

Lawrence’s photographs work to capture some of those aspects that can change a person, whether it is in the rural south or the area of Greece where he lived for a short time.

A gallery talk with Lawrence is scheduled for March 9 at 2 p.m. at LAM. The exhibition runs through April 13.

“It is a tremendous honor for LaGrange Art Museum to have an exhibition of this sort,” said Laura Jennings, the executive director of the LaGrange Art Museum. “John Lawrence is so well loved in our community. To look back at somebody’s body of work for 50 years is just humbling.”

To learn more about the LaGrange Art Museum, visit Lagrangeartmuseum.org.