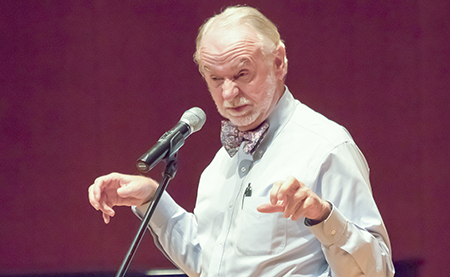 Donald Davis will be among the storytellers returning for the 23rd annual Azalea Storytelling Festival, which begins on March 1. (Contributed)

The 23rd Azalea Storytelling Festival returns to LaGrange the weekend of March 1-3 at LaGrange College’s Callaway Auditorium. This beloved, family-friendly event promotes the art of storytelling by bringing nationally recognized artists together for a weekend full of storytelling concerts.

The Azalea Storytelling Festival has been recognized as one of the oldest such festivals in the state of Georgia and was named one of the top 20 events in the 12 Southeastern states by the Southeast Tourism Society.  The Azalea Storytelling Festival draws approximately 2,500 people each year, with almost 200 patrons attending from 23 states and several foreign countries.

This nationally recognized festival continues to see some of Georgia’s and the nation’s premier storytellers on its stage. The featured performers include Donald Davis, Josh Goforth, Tim Lowry, Ed Stivender and TroupCounty’s beloved Carol Cain as Emcee.

Donald Davis was born in a Southern Appalachian mountain world rich in stories and is a prominent and beloved member of the national storytelling scene.

Grammy nominee Josh Goforth has performed in every U.S. state and abroad, including performances at Carnegie Hall and the Grand Ole Opry.

For more than 25 years, Tim Lowry has been telling stories “of the people, by the people and for the people,” providing a variety of folk tales and stories from American history to thousands of listeners across the country.

Described as “the Robin Williams of storytelling” and “a Catholic Garrison Keillor,” Ed Stivender is universally recognized as one of America’s finest storytellers.

The Azalea Storytelling Festival is a proud organization of the Lafayette Society for Performing Arts and has received the Troup County Tourism Visionary Award, as well as the National Storytelling Leadership Award.  This community event is made possible by the support of Kimberly-Clark, West Georgia Technical College, Nissan of LaGrange, Courtyard Marriott of LaGrange, LaGrange-Troup County Chamber of Commerce, the Friends of LaGrange Memorial Library, the Troup County School System, Hills & Dales, the WestPoint Fund, Callaway Foundation Inc. and LaGrange College.

The 2018 Azalea Storytelling Festival will take place March 1-3 at the Callaway Auditorium on the LaGrange College Campus at 801 Dallas Street.  For additional information, and to purchase tickets, visit Lsparts.org or contact the LSPA Business Office at 214 Bull Street in downtown LaGrange (706) -882-9909.

LaGrange Mall to support multiple organizations at Color for a Cause

The LaGrange Mall announced Wednesday the organizations participating in Color for a Cause, a live mural coloring contest and shopping... read more