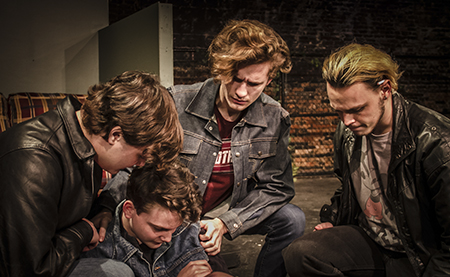 New Horizon Theatre is preparing to bring S.E. Hinton’s coming-of-age novel, “The Outsiders,” to the stage.

Also known for Francis Ford Coppola’s 1983 classic movie of the same title, this story is filling the NHCT stage with fights, romance, heroism and drama, all portrayed by a cast of adult and teen actors.

“The Outsiders” tells the story of a teen gang in rural Oklahoma, the under-privileged “Greasers,” who are perpetually at odds with the have-it-made rich “Socs,” a rival group.

“This play is told through the eyes of Ponyboy Curtis,” said Keith McDow, the show’s director. “Everything that happens comes from his recollection as he is thrust into adulthood too soon.”

In “The Outsiders,” the audience will meet Dallas, Sodapop, Johnny, Bob, Ponyboy and Cherry.

When Ponyboy and Johnny get into a brawl that ends in the death of a Soc member, the boys are forced to go into hiding. Soon Ponyboy and Johnny, along with other Greaser buddies, must contend with the consequences of their violent lives. While some Greasers try to achieve redemption, others meet tragic ends.

McDow said that the cast has worked hard to bring this classic coming-of-age tale to life on stage.

“I have been moved during this rehearsal process, and the dedication and commitment some of these young actors are putting in,” McDow said. “There are already certain scenes that I look forward to every night, and I sit there watching them over and over.”

Performances will take place in downtown West Point at the New Horizon Theatre on Feb. 28, March 1 and March 2 at 8 p.m. There will also be performance on March 2 and March 3 at 2 p.m.

When staff at Twin Cedars asked a group of seven students to take on a project to learn about the... read more