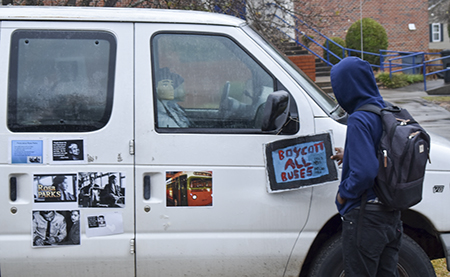 A student adjusts a sign on a bus covered inside and out with history facts at Twin Cedars’ Bradfield Campus on Tuesday. (Alicia B. Hill | Daily News)

When staff at Twin Cedars asked a group of seven students to take on a project to learn about the Montgomery bus boycott, the group could have made a poster or a diorama. Instead, the group of boys asked permission to use an old bus to stage a reenactment of the boycott in addition to writing an essay on the topic and creating fact sheets on influential figures of the Civil Rights movement.

On Tuesday, one of the teenagers excitedly talked about the contributions of historical figures, like Rosa Parks and Maya Angelou, as he proudly showed off the bus. He said that he learned a lot about teamwork while doing the project with the help of Twin Cedars staff.

“We were actually going to try to build a bus out of cardboard, so we saw an old bus [that we asked to use for the reenactment],” said Sherry Davidson, a Twin Cedars employee who helped the group with the project. “That is how we came up with the bus and to be able to put the people in there to symbolize the different [people] who were part of the boycott.”

Twin Cedars staff said they were impressed with the time and effort that the students put into the project, which was the largest that has been created at the cottage or school.

“It is rewarding [seeing them take on this project],” said LaSwann Beasley, cottage supervisor at Twin Cedars.

“A lot of times, kids don’t take an interest in history, whether it is African American history or just history, but these guys, when Ms. Sherry presented them with a challenge, they stepped up to the plate. They did a really good job, and they worked hard.”

Davidson said the students will soon begin working on another project, and Beasley said he hoped what they learned through the project and reenactment would serve as an inspiration for years to come.

“In their minds, we have embedded something that I think will never leave them,” Beasley said.

Davidson said the project happened to coincide with the students learning about issues related to the Montgomery bus boycott in school, thus reinforcing those concepts in a fun way.

“They had fun in the process of doing it,” Davidson said. “It is a great group of young men.”