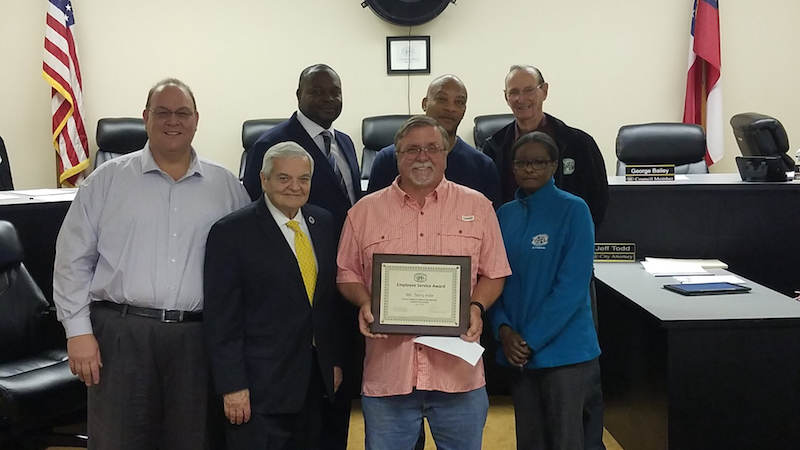 HOGANSVILLE – On Monday night, the city of Hogansville voted to award a bid request to Roof Depot for work associated with replacement of the Royal Theatre/City Hall roof and voted to move forward with repair and paving of Pine Street as well. Both decisions came after some discussion between the city council and city manager.

Roof Depot was the sole bidder on the Royal Theatre roof project, and produced a base bid of $87,350 for the work. The project is being funded with SPLOST dollars and federal grant funds via the Georgia Historical Preservation Division. The Hogansville city staff recommendation was to include a five percent contingency option in the bid, thus awarding the project to Roof Depot for an amount not to exceed $91,750.50. The contingency fee was a point of discussion.

“I get concerned every time I see a five percent contingency fee,” City Councilwoman Theresa Strickland said during the meeting. “I feel like there’s always going to be something questionable in it. I feel like we should go with the bid, if something comes up, it just needs to come before the council to see if it’s an excessive amount of money. That’s my concern.”

City Manager David Milliron made note that no project has been required to pay a contingency fee during his tenure as city manager, and the contingency fee is included in all bids to ensure projects do not come to a halt in the event additional work is needed on a job site.

“The council pays me for a professional opinion, and that’s exactly what you’re getting,” Milliron said. “Who knows if they [Roof Depot] find something [additional] or not during their work, but if they do, you have to allow your city manager to manage these projects. I have proven time over time that we do so. Every contract that this council has approved to date has a line item of a contingency. There is a reason for that, for unforeseen circumstances.”

City Councilman Reginald Jackson suggested, in the event of the need to spend contingency fees, Roof Depot submit all receipts and paperwork associated with those contingency fees to the council for review. With that caveat, the council voted to approve the bid.

The city council also voted to begin paving work on Pine Street as soon as is feasible, though the road may be torn up again within the year and re-paved once more, as a result of potentially impending Community Development Block Grant funds.

“It’s the worst road in the city,” Jackson said. “I think it needs to get paved this year. If somebody has to cut it [later], they’ll do a professional job.”

Johnson made a motion to pave Pine Street using SPLOST dollars as soon as is practical, which passed.

In other news, the city: