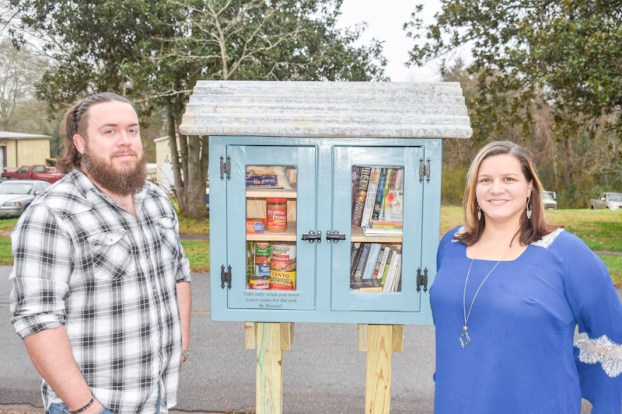 Mike and Amanda James stand in front of the Little Free Pantry located in front of their home on Avenue E in West Point. The James' installed the pantry in an effort to provide books and non-perishable food items to the community. - Dustin Duncan

WEST POINT —Amanda and Mike James keep looking for new ways to give back to the community.

In their latest project, they have constructed a Little Free Pantry in front of their home on Avenue E in West Point. It resembles a small, light blue house with a tin roof bolted onto two by fours in the ground.

On both sides of the small structure, it says “Take what you need, give what you can, above all, be blessed,” and “Take a book now, leave a book later.”

Amanda James said the pantry has food on one side and books for all ages on the other. She said the structure went up Wednesday, Feb. 13 after contracting Ron McClellan at Ron’s Wood Studio to help make it.

The family initially stocked it with non-perishable food from their house, along with books of their own and from family.

“Anything that we are not using, we can put in there, or the community can stock it,” she said.

The community has been using the pantry as well, Amanda James said. Lately, there was a pack of crackers and peanut butter she didn’t put in there.

“So, people are donating to it,” she said.

“It is not a city thing — it is a community thing,” she said. “If people would put these up in each community, they would sprout up like crazy.”

The James’ had to go through the West Point City Council to get their pantry approved, but only because it is technically on city property on the other side of their sidewalk. However, it was quickly approved.

The idea stemmed from something she saw on the internet and also from a dollhouse she saw on the side of the road one day. She and her husband started to work on the house to see if they can fashion it to meet their needs for a pantry but realized they couldn’t get it to shut tightly and was afraid if used, everything inside of it would be ruined.

The James’ family moved into the West Point neighborhood in at the end of 2017, and after selling off some real estate, they were able to find the home they wanted. As Amanda James was looking for a way to give back to the community, she came across a woman one night at a store who was struggling between buying toilet paper or food for the night.

After this, Amanda James started to make what she called “Resource Bags,” which were filled with toiletries, non-perishables and a blanket. The bags were distributed throughout the area from Beauregard to LaGrange with major help from the Lanett Police Department and the Troup County Homeless Coalition. Altogether, she said they made about 225 bags to hand out.

Additionally, Amanda James has created “Resource Cards,” which she plans to put in the pantry as well.

There are four cards in all — one that has numbers for agencies in the area for people needing help, one to help buying groceries on a budget and meal planning, one with a sample budget for somebody who makes minimum wage and one with Bible scriptures to help with different areas of life.