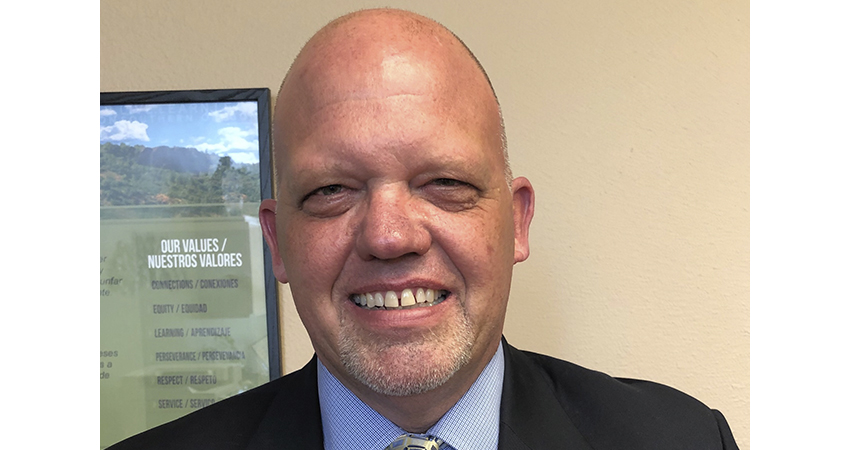 Brian Shumate was named the new superintendent of Troup County Schools on Thursday.

Brian Shumate was named the superintendent of Troup County Schools at Thursday night’s board meeting. He’ll start in Troup County on July 1.

Shumate currently serves as the superintendent of the Medford School District in Medford, Oregon, a position he has held since 2014. Before that, Shumate spent 27 years with the Jefferson County Public School System in Louisville working as a teacher, coach, assistant principal, principal and assistant superintendent.

Larry DiChiara and Peggy Aune were also finalists for the position. Thursday night’s decision was the end of a search that has gone on since Dr. Cole Pugh resigned in August. Since then, the board has worked with search firm McPherson and Jacobson to narrow the field from 52 candidates to one.

“The board followed a very deliberate search process,” said Board Chairman Kirk Hancock. “We were as transparent and collaborative as the law would allow. We are excited and confident that we have selected the best person to lead our school system.”

Shumate was not at Thursday night’s meeting, but he talked to The LaGrange Daily News by phone.

“I felt like the community and the parents, students and staff members certainly care about their school district. They want their school district to be the centerpiece of that community and are very proud of the place they live and where they send their kids to school,” Shumate said. “I want to meet those goals that they have set for a superintendent and move with great intent to satisfy and meet their needs out of a leader. And I think I have the ability to do that, so I’m certainly humbled and honored to be selected.”

Before his move to Oregon, Shumate had lived in Kentucky his entire life. He earned a bachelor of arts degree, master’s degree and doctor of philosophy from the University of Louisville. Now, he’ll make his second cross country relocation in five years. It’s about 2,600 miles between Medford and LaGrange, but it’s a move that will get much closer to family in Kentucky.

Shumate said it will be difficult to leave the Medford School District because of the relationships he built there.

“It is bittersweet to leave Medford. The staff has been awesome, and we have made progress,” he said. “I would not even have the opportunity to interview for a job like Troup if it were not for the great work of our staff in Medford and the families and students that have done great work.”

The Medford School District serves 14,000 students, according to the district’s website. Troup County Schools has an estimated 12,300 students.

Under Shumate’s leadership, Medford saw a 13-percentage point increase in graduation rates over the last three years, increased district attendance over a two-year period and surpassed state averages in all content areas on Smarter Balanced assessments, which are used to determine skill level in Oregon.

Shumate said he will use Skype and similar technology to talk to district staff in Troup County over the next few months.

He also plans to make several trips to Troup County before his start date.

“However, I will begin to use my off hours to study more and more about the Troup County community.”

The Troup County School Board said it valued transparency from the start of the search in October. It hired McPherson & Jacobson to lead what became a national search and immediately had a meeting to determine the skills and characteristics needed in a superintendent. Listening sessions were also held with business leaders, political leaders, parents, classified staff, teachers, community members, administrative staff and the board to get community feedback on the search.

“We brought all three finalists to LaGrange, and they too met with community groups, teachers and administrators and parent and teacher groups,” Hancock said. “All these groups provided input to the board. The board conducted extensive interviews with all three candidates, searching for the right person that embodied the attributes that we had identified earlier.”

The details of Shumate’s contract were not discussed during Thursday night’s meeting.

Until July, Roy Nichols will continue to serve as the interim superintendent of Troup County Schools, a role he has held since August.