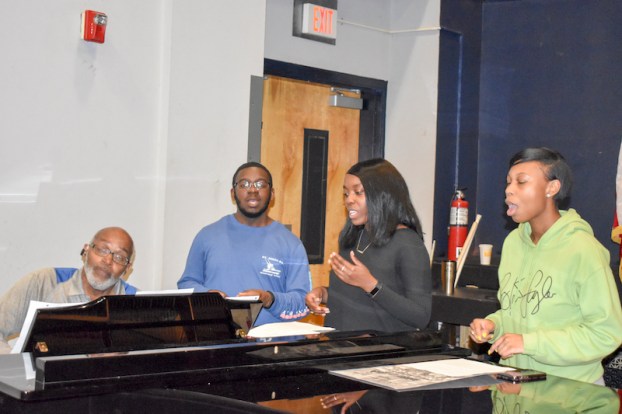 LaGrange High School students and alumni will present the 21st annual Black History Month program in the school’s fine arts auditorium during the weekend of March 2. - Alicia B. Hill

This year’s performance is titled “Run On: Forward to Freedom,” and it will cover some significant moments in African American history through music and dramatic performances.

“This program is going to have a duel theme,” Director Adrianne Redding said. “It is set in two different time periods. One is in the Antebellum South during slavery and the Civil War era. In another part of the play, another family will be represented from the Civil Rights era that was very much involved in the Civil Rights movement. The Voting Rights Act of 1965 is something that will be highlighted in the show. One thing that is different is that dual-theme. I wanted to switch up the way I told the story.”

The program presents a different story every year, with previous years looking at the Freedom Rides and other historic events. Adrianne Redding said that some of the history that has been drawn on for this year’s performance does not show up in many history textbooks.

“I think it is a very important story to tell, because a lot of what we are telling, there is not a lot of history books about,” Adrianne Redding said. “We don’t learn a lot about it in school. One thing that I always try to stress to them is the importance of the research and knowing your history.”

The program endeavors to teach both the student performers and the audience a bit more about history, but that isn’t all that students get out of the experience.

“I think what I have learned most through the experience is that it is OK to jump outside your comfort zone. Normally I am a quiet person and to play a role that is so different to my personality has really given me the ability to do something that I never would have done had I not been in the play,” said Temima Brown, a junior performing in the play. “As far as the play goes, we’ve learned a lot about history.”

Brown said that students learned how the underground railroad worked and some of the other ways that slaves were able to escape. That education is part of the reason why the program was started by former Vice Principal Kenneth Redding Sr. during his time at the school.
“I think it teaches them perseverance, because you have to work for a long time to get it right, and not all of the students receive scholarship awards,” said Kenneth Redding Sr., who originally started the production in 1999. “A lot of them do it just because they want to do it.”

The program has raised thousands for student scholarships over the years, while encouraging students to grow in terms of talents and skills.

“It is very important that we really focus and support our young students, not only with this, but with the high school,” Adrianne Redding said. “This is a scholarship program. It is called the Modibo Jamma Scholarship Program, so the proceeds of the program go right back to the community.”

The scholarship name means “family helping,” and the number of scholarships given out is dependent on ticket sales.

Everyone in the community is invited to attend the performance.

“We have this phenomenal choir,” Adrianne Redding said. “Our actresses and our actors, they’ve been working so hard, so I am really excited for the audience to see their talents as well because this is a phenomenal group of students — and alumni as well.”

“Run On: Forward to Freedom” will be performed in the LaGrange High School Fine Arts Auditorium on Friday and Saturday at 7 p.m. and on Sunday at 4 p.m. Tickets cost $8 in advance or $10 at the door. The Sunday matinee costs $8 at the door.

School board decides on calendar for 2019-2020 school year

The Troup County School Board officially approved the school calendar for the 2019-2020 school year on Thursday night. Only one... read more