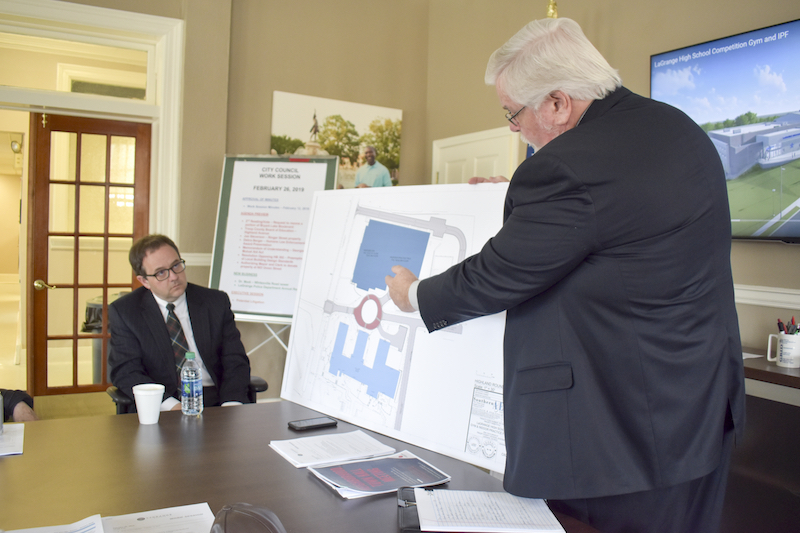 On Tuesday, the LaGrange City Council voted unanimously to allow for the temporary closure of Highland Avenue between North Greenwood Street and Marshall Street during construction of LaGrange High School’s new athletic facility — at the Troup County Board of Education’s request.

The Troup County School System plans to break ground on the $15 million athletic facility in March and construction is expected to be complete within 9 to 14 months, depending on weather and other factors. Construction on the comparable facility at Troup High School has been delayed by 47 days due to rain, and similar weather during the LHS facility construction could extend the completion date beyond the contractor’s 9-month estimated completion time. The closure will allow for the removal of dirt and the delivery of steel beams and other construction materials with minimal interruption to city traffic.

However, the decision on whether to grant the school system’s request to permanently close the section of road was tabled until a later date. Chief Lou Dekmar said during the work session that previous construction on the road did not seem to have inhibited traffic, and he recommended a temporary closure so that the council could base its final decision on the traffic pattern during the temporary closure.

During the city council work session, Radcliffe reiterated the school system’s October request to close the segment of the road between the high school and the new athletic complex for safety reasons, but he also proposed an alternative, which would include a roundabout and speed humps, limiting traffic to one-way travel.

“This alternative gives us two options,” Radcliffe said. “We can leave this as a two-way street, or as Lt. [Mark] Kostial had talked about, making it one-way going toward Greenwood. It would still have the circular entry to the auditorium, the school and the gym.”

The council unanimously voted against the permanent closure of the segment of Highland Avenue by the school during its October meeting, and some residents of neighboring streets spoke against the closure at that time. Some of the concerns from that meeting lingered, and Councilman Nathan Gaskin spoke against abandoning the street to the school system, saying that the school system should consider a bridge or a tunnel. Radcliffe said that the concepts had been considered, but would be logistically and financially difficult to pursue. LHS Principal Alton White said there was not a good location for a tunnel entrance that would serve the purpose the entire school.

“I love this concept that y’all are doing, and I think it will really benefit the City of LaGrange and Troup County, altogether,” Councilman Willie Edmondson said. “I just have a little heartburn on permanently closing that street. I love the alternative. I think we need to temporarily close it because of the construction, to be safe. The problem that I have with the permanent closure is you all have the ability to build a street there and it not be on city specifications.”

Radcliffe said the school system still believes that the closure would be what is best for students. He said the plan to close the street has received support from parents and other groups have been consulted on the closure.

“Our number one concern is the safety of the children on a regular basis going back and forth,” Radcliffe said. “This is going to be a regularly-used gym. Although we talk about the value of it being a designation spot for athletics and sports, it is going to be used on a daily basis by the students over at LaGrange High School — back and forth all day long as classes change.”

A third option — leaving the road as is but inserting large speed humps— was also briefly noted during the meeting, but it was unclear at the end of the meeting which plan would take precedence.

Community use of the facility was also briefly discussed, with Councilman Tom Gore expressing concerns for pedestrians crossing from parking areas.

“One of the other things we are concerned about is community use,” Radcliffe said. “Certainly, our students will begin to get used to the patterns and so forth, but as the community comes in, we expect that Parks and Rec will want to use the facility. Some of our other neighboring entities will want to use it as well. What is going to happen with traffic going back and forth when you have that many students?”

The arena in the complex will seat 2,000 people, according to Radcliffe, and it is already slated to be the site of major competition.

“When we talk about the economic impact to the city that this could have, we have been asked by the Georgia High School Association to host the 2021 sectionals to the wrestling state tournament, which is between the regions and the state finals,” White said. “You are talking about probably 150 wrestlers and their families [at the event].”

West said that he is excited at the prospect that LHS will be able to host major events in LaGrange.

If the city votes to permanently close the road, it will be abandoning the property to be managed and maintained by the Troup County School System.