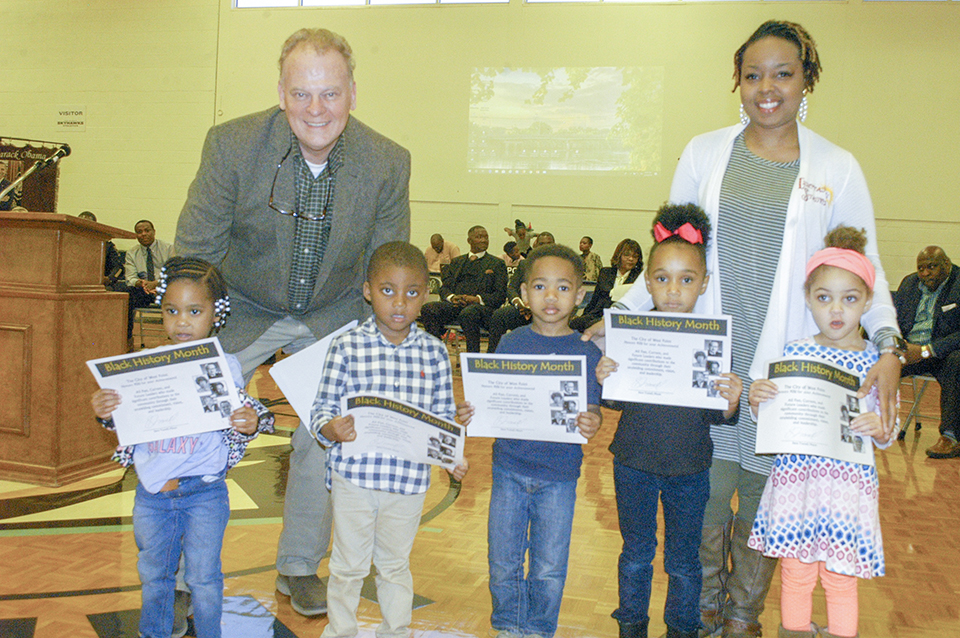 WEST POINT — At a Black History Month program hosted in the West Point gym on Tuesday, local students and business owners were recognized on having led productive lives and attaining success.

Council Member Sandra Thornton made a plaque presentation to local Salvation Army President Lisa Martin in appreciation for the good work being done in the local area. Some of their holiday season bell ringers were recognized in appreciation for the work they do. Approximately 100 children in the two-county area received Christmas gifts in 2018 thanks to the Salvation Army.

“We have a very diverse student population,” Watts said. “We are in this together, and together we figure out how to make it work.”

Watts is a 1995 graduate of Troup High and is the only alumnus of the school to serve as its principal.

“My vision is for my students to be guided, supported and nurtured,” Watts said. “We want  them to know that we have their backs. Sometimes you have to get on them. We want them to be the best possible versions of themselves. The West Point community is invaluable in our mission. We love your kids and appreciate your support.”

Frederick Stanley of Long Cane Middle School introduced a group of his students who have excelled in athletics and in all-around good behavior. They are Christian Hudson, Christian Sands, Tray Blackmon and Kemarius Folds.

Brandon Walker, director of student engagement for Point University, recognized some Skyhawks who have been exemplary students.

From college-level recognitions, children were next in the spotlight as Sabrina Davidson of the Innovation Station Learning Center recognized some of her pre-school children.

The guest speaker for the day, Atlanta attorney Vernon M. Strickland, talked about a difficult childhood in Newnan and then going on to find success in athletics, mechanical engineering and now in the courtroom.

“We were always poor,” he said. “There was seven of us living in a small house in Newnan., but we were one, big happy family.”

Strickland’s first trial in life came when he was 13 years old in 1987.

“Right after my birthday I started to lose weight and had a terrible earache,” he said.

He went to the hospital for tests and was told he had childhood leukemia. His chances of survival were said to be 15 percent.

“That meant I had an 85 percent chance of dying in a short period of time,” he said. “They sent me to  Eggleston Children’s Hospital, where my condition went from bad to worse. I was in critical condition for a month. It was a scary time for all of us.”

Young Vernon got better and was allowed to go back home to Newnan. He then found out he was something of a local celebrity.

“I can remember seeing in the downtown stores donation buckets with newspaper articles about this boy with leukemia. It made me believe that my life had purpose.”

A couple of years later at 16, Strickland had his second major trial. “I woke up in the hospital,” he said. “They told me I had been in a car accident two days before. The last thing I could remember was backing out of my grandmother’s driveway.”

He sensed something awful when the chaplain of the Newnan High football team came to see him. “He told me my baby sister didn’t make it.”

She had been in the car with him at the time. Strickland paused for a moment and asked the crowd to bear with him.

“After all these years, I can’t talk about this without getting emotional,” he said.

Strickland was a star linebacker with the Newnan Cougars, then led by legendary coach Max Bass. An excellent student, he went on to attend Georgia Tech, majoring in mechanical engineering. He also walked on to the football team.

“I’ll always remember my first practice at Tech,” he said. “I was sixth string. It would have been easy to give it up and concentrate on my studies. Instead, I worked harder. Eventually I worked my way up to the first team.”

“It’s been an amazing journey for me,” he said. “After graduating from Georgia Tech in 1998, I had the chance to play pro football, and not just with any team. I had the chance to be a San Francisco 49ers. That had been my favorite team growing up.”

“To succeed on the next level, you have to be a coach on the field,” he said. “There is so much you have to know and not much time to learn it in.”

He knew that something must be going on when a host of reporters was waiting to talk to him at his locker following practice one day. That’s because then head coach Steve Mariucchi had told them he’d been the bright spot of preseason camp.

Strickland played for San Francisco, the New York Giants and the NFL-Europe’s Berlin Thunder before returning home to Georgia to work as a mechanical engineer.

“I had a good job in the Atlanta area and was well pleased with my job,” he said.

The position required lots of analytical thinking. One day one of his co-workers told him, “Man, you ought to be a lawyer.”

It was a casual remark that struck home. There was one more challenge for a still-young man who had overcome all kinds of obstacles.

He enrolled in the Walter F. George School of Law at Mercer University in Macon. He graduated, passed the bar and is now a partner with the prestigious Wargo & French LLP firm in Atlanta. He practices law in complex commercial litigation, intellectual property, employment and internal investigations. He and wife Makisha Williams Strickland have two very gifted children, 10-year-old son Drake is a child actor and 8-year-old daughter Emmerson Rose Strickland is already a nationally ranked track athlete.

“Hard work is the key to success in anything you do,” he told the crowd gathered inside the gym. “You do yourself a disservice if you don’t push yourself to the limit. It’s the winners in life who do the things losers won’t do. Don’t be afraid to try. Nike summed it up best in 1988: Just Do It.”