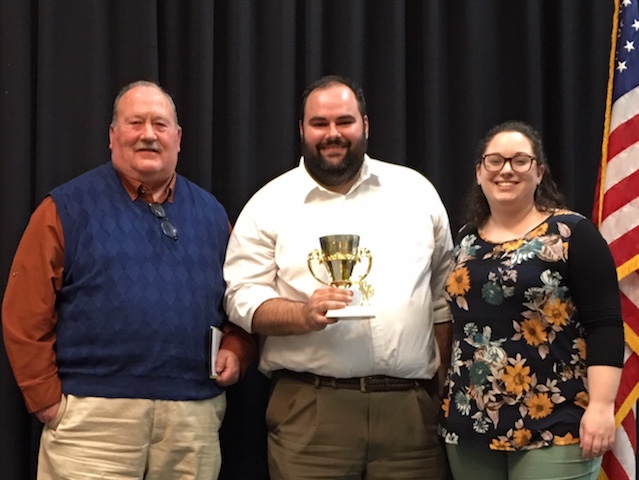 This year, the Troup County Certified Literate Community Program put a twist on its oldest fundraiser by hosting a Literacy Bee instead of the usual Spelling Bee.

The twelve teams who took part were challenged with literary-inspired questions such as: Charles Lutwidge Dodgeson is better known by what name? (Lewis Carroll); Who wrote “Ender’s Game?”; and what 1949 Western novel by Jack Schaefer features a one-name gunslinger, turned into a 1953 movie starring Alan Ladd? (Shane).

The winner of the first annual CLCP Literary Bee was the Troup County Historical Society, with Randy Allen, Forrest Johnson and Janie Stallings. The Literacy Warriors came in second, with members Kate Chambers, Emmanuel Reddish and Patty Youngblood. The Degenerates, a team made up of Troup High School faculty, won the Best Spirit award for costumes and audience support.

“We just want to make education the buzz word and [let people know] that learning is fun, and it is something that you’ll always use,” said Debbie Burdette, Troup County CLCP executive director. “It is a community effort. It takes the whole community to get this word out. There were different businesses represented in the bee, and there were different schools and different organizations that came together to put this on.”

CLCP hosted its first spelling bee in 1999, and the annual event has seen a number of teams compete over the years. However, after 20 years, the CLCP board felt that it was time to try something new.

“I was a little nervous since we were changing it from our 20-year spelling bee,” Burdette said. “It is something different, but the CLCP Board thought it was time to do something different. We came up with the literary bee, and questions were asked about books, poems, magazines and newspapers.”

Dr. John Tures, a LaGrange College professor and columnist who has been published in newspapers across the country, helped create the question list, including the questions used in the final elimination rounds of the literary bee.

“Instead of a spell off, we had to have a question off,” Burdette said. “We got down to five teams at the end of an hour and a half, and we asked five questions to those five teams. That eliminated three teams. Then we got it down to two.”

Burdette said that she hopes the literary bee will become a new community tradition that will encourage literacy in the community for years to come.

“I think everyone had fun, and we want to do it again next year,” Burdette said. “We’ll carry on with this new tradition.”

Troup County CLCP also plans to take part in Color for a Cause on March 12 at the LaGrange Mall, and it will host Lobbing it for Literacy in June. The group has led initiatives like Books for Babies, Little Free Libraries and giving dictionaries to students. Burdette said new Little Free Libraries are planned for several locations in the community in the near future.