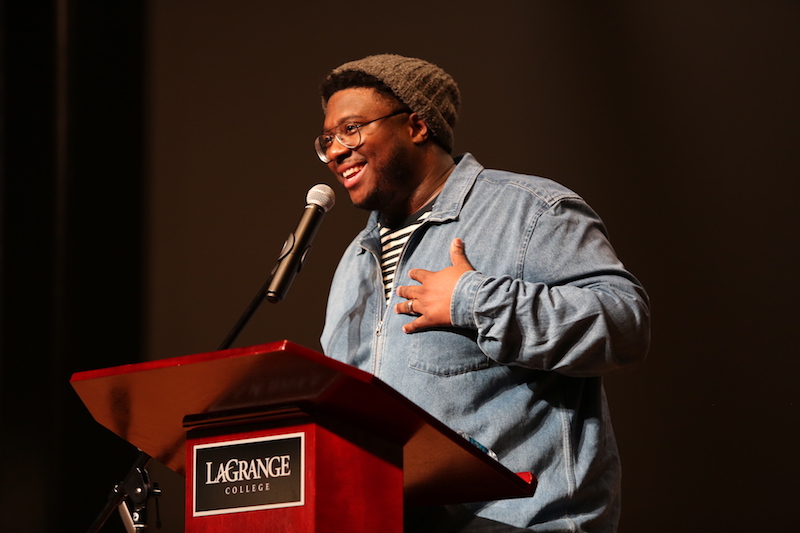 Grammy-award-winning producer and songwriter David Harris visited his alma mater, LaGrange College, on Friday to speak to students interested in a career in the music industry. Harris, who uses the professional name Swagg R’Celious and graduated from LaGrange College in 2008 with a degree in composition and music technologies, was nominated for two Grammy’s in 2019 for his work on the H.E.R. album of the same name, winning a Grammy for best R&B album. In his discussion with LaGrange College students on Friday, Harris’ message to them was clear: take the profession seriously from the start.

Harris, a lifelong musician, arrived on campus at LaGrange College with no intention to major in music, electing instead to pursue business at the outset. That quickly changed, however, when he got into his coursework and realized his breadth of knowledge related to music was not as large as he thought.

“I thought I would do something like business,” Harris said. “But as fate would have it, it didn’t work out that way. I took a few music classes, and it really hit me that I didn’t know as much as I thought I knew about music. To someone who thought he was educated in music, taking those early classes really exposed me to things that I never was exposed to. Once I discovered how much I didn’t know, I wanted to learn more about it.”

Harris graduated in 2008 before enrolling at New York University to pursue a master’s degree in music technology. Soon after enrolling in the program, Harris landed an internship with MBK Entertainment, where he quickly caught the attention of Conrad Robinson and CEO Jeff Robinson, using the hook from a gospel song he wrote while an undergraduate student in LaGrange.

Harris has gone on to work in the hip-hop, gospel and R&B genres, and has worked with artists including H.E.R., Alicia Keys, Wale, Neyo, Livre, Busta Rhymes, B.O.B., Kehlani, Brandy and many more. He is an advocate of hard work and is a walking example of what dedication, talent and determination can bring in the industry.

“Incredible things can happen if you just apply yourself and believe in yourself, and take advantage of the opportunities around you,” Harris said.

After his speech, Harris spent time eating lunch with the LaGrange College students before working in the college’s recording studio as well.