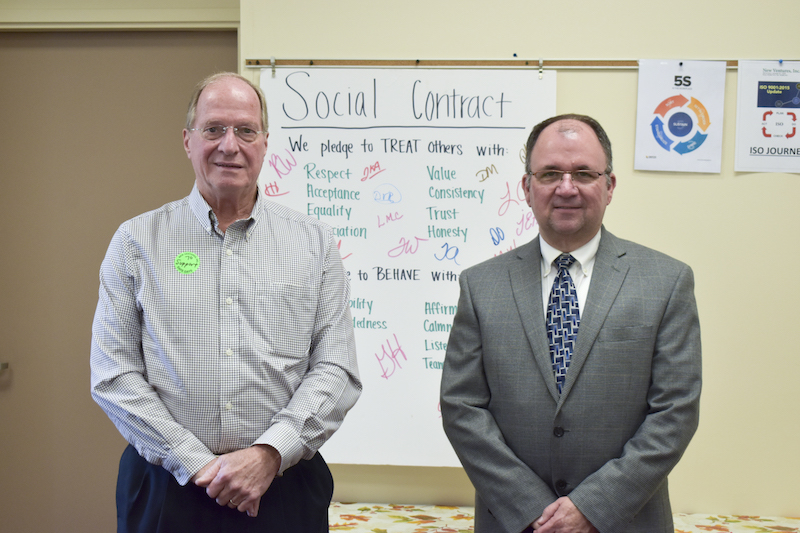 Dave Miller (left) has stepped down as CEO of New Ventures, while Mike Wilson (right) has stepped into the role full time. - Alicia B. Hill

A lot can change in more than a quarter of a century, and Dave Miller has personally overseen a large part of that change here in Troup County through his work with New Ventures, Inc.

Now, after more than 26 years of service, Miller, New Ventures’ former CEO and president, has turned over the reins of the nonprofit organization to Mike Wilson, who has been with New Ventures since 2011.

“I think building on what Mr. Miller has done [is part of our future],” Wilson said. “We have a great foundation going forward at this point, and I hope that we continue to impact lives. There is no way to measure the amount of lives that have been touched in Mr. Miller’s tenure.”

Miller has helped guide New Ventures through the changing needs of the community over the years, from the early years, when the employment development center primarily worked with individuals with disabilities, to present day, where it serves a wider audience of people seeking to overcome barriers to employment.

Miller and Wilson agreed that while sometimes the impact of those programs is immediate, sometimes the full impact is not seen until years later.

“We started out serving the population of people who have disabilities,” Miller said. “That was the main purpose for the facility being put into existence. We responded [to demand] by expanding that mission to include non-disabled individuals who had strong barriers to employment — people who had lost jobs because they didn’t have a good grasp of the basic skills that were necessary.”

About 10 to 15 percent of the people now served by the nonprofit have disabilities, but under its expanded mission it is also helping people overcome homelessness and long term unemployment. New Ventures works with people from a wide range of backgrounds, and Miller said that he has found that the most in-demand skills are things like self-management and interpersonal skills.

“It is not having hard knowledge skills that you have to go to school to get,” Miller said. “It is those little things, like people getting along together, people treating other people the way they would like to be treated.”

Miller also said that the most common reasons why people lose their jobs are attendance, team work, a lack of politeness and an inability to show up for work on time. Those soft skills can result in job loss for otherwise skilled employees, and they translate across all fields. However, he said even with the training, people have to be ready to apply the skills, which can take some time.

“Long term [impact] is probably greater than short term, because we’ve seen people come through training and not quite be ready to absorb everything, but they still get exposure to it,” Miller said. “Then we see results 2, 3 years later when we are in a restaurant, or we are in a place of business, and we see people who came through the program, and they are working. It took them a little while to get there. Others come through, and understand immediately what they need to do and begin doing it.”

Miller said that he has seen a positive response from many of the homeless people who go through New Venture’s program, and he credited that response to the relationships that are formed during training.

“So many of the people that we serve have been told before that they were worthless, that they’d never succeed, and they have a track record that is pretty spotty in terms of success, because they dropped out of school,” Miller said. “Some of them have gotten in trouble with the law, some of them on more than one occasion. Some of them, their parents have put them out.”

For someone with no home, no job and little to no job training, a decent life can seem unobtainable, but with New Ventures, people facing those barriers are not alone.

“We had one young man who was brought to the state line, and his parents put him out on the side of the car and said, ‘We’re done. Don’t come back,’” Miller said. “He walked to LaGrange and was homeless and heard about us, walked down Fort Drive, came in the front door and said, ‘I need some help. I’m homeless.’”

Wilson said the man heard about New Ventures through the warming center.

“We accepted him into the program, and he is now working for one of the major industries in town,” Miller said. “They have recently enrolled him in a management training program for non-college degreed people, so he went from homelessness to making well above the national poverty limit, a livable wage, in less than 6 months.”

Wilson said that the success stories are inspiring to him.

“A lot of times someone with a disability or even someone with a barrier to employment who has been knocked down a lot will end up being a much better worker in the long run for people,” Wilson said. “I can’t imagine being where he [abandoned man] was at and having to walk from the county line and living under a bridge and then going back to the point where he has a roof over his head and a future.”

However, Miller said New Ventures is constantly looking for other unmet needs in the community.

“We are always watching external signs for what is going on in the community,” Miller said. “What are those needs in the community that aren’t being met? And is this something that we need to discuss as a staff and respond to? With that type philosophy, it has led us to do things such as getting involved with the city, the county, the warming center and the LaGrange-Troup County Homeless Coalition.”

New Ventures has sponsored the warming center for three winters now, and it will be one of the legacies that Miller leaves behind as he spends more time out of the office.

“On behalf of the board, we appreciate the work, commitment and leadership Dave provided during his 26+ years,” said the New Ventures board of directors in a statement. “The impact of services provided, the scope of those impacted by him, and his sincere concern for others never wavered. We are very grateful to him for his service and leadership to Troup County and New Ventures, and we sincerely wish him the best in the years to come.”

Miller said that he plans to remain around New Ventures until June on a more casual basis to offer support to Wilson and New Ventures.

“The organization has a good strong future under Mike’s direction,” Miller said. “I think that they are poised for growth with our strategic plan, and it is a fairly ambitious plan that the organization will be even stronger in the future than it is today.”

Miller said that he is confident in Wilson’s ability to move New Ventures into the future.

And what does he hope to see 26 years from now?

“A program that is touching 500 to 750 lives per year,” Miller said. “The demand for good workers in industry is not decreasing. There is more of a demand nationwide than there has been ever before, so I think to be able to train that number of people and doing it on a regional basis — possibly doing it on a basis where people are coming from outside the region, finding some affordable housing during training and either going back to their location or staying in LaGrange to add to the labor force here.”