New K9 gets to work in Troup County 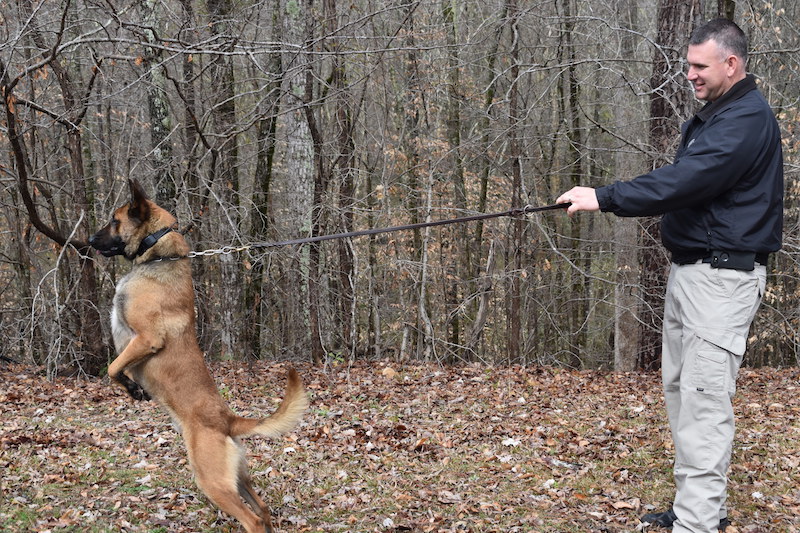 Chapo, a Belgian Malinois, is the newest K9 with the Troup County Sheriff's Office. Chapo and his handler, Lieutenant Nathan Taylor, are shown working on commands. - Baker Ellis

The Troup County Sheriff’s Office recently welcomed the newest four-legged member of its team into the ranks. Chapo, a Belgian Malinois, recently completed a five-week training course in Northport, Ala. alongside handler Lieutenant Nathan Taylor, and is now getting to work in the community.

Taylor, who has been with the Sheriff’s Office for nearly 15 years, has been training dogs since his early 20’s and is no stranger to handling K9’s. Chapo is the third K9 Taylor has handled in his time in Troup County and replaces Biko, a Dutch Shephard who passed away in February as a result of health complications. The new addition to the department, and to Taylor’s life, is very welcome.

“It’s tough losing a dog like I lost my last one, but we realize it comes with the job, eventually, unfortunately, they’re going to leave us,” Taylor said of losing Biko. “It’s easier when you can get a new dog, take your mind off the loss and get back to work.”

Taylor began working with the Sheriff’s Office as a patrol deputy, moving to sergeant and then to lieutenant in December of 2017. He now oversees the narcotics division, the traffic units and K9 division. With the addition of Chapo, the Sheriff’s Office is back to handling two K9’s, Chapo and Stella. Stella is trained in explosives detection, while Chapo will now replace the work Biko did in narcotics detection, tracking and apprehension.

The bond between handler and dog is a unique and strong one, and Taylor is excited at the opportunity to once again get to build that relationship.

“It is an exciting process to start,” Taylor said. “We’re getting these dogs with very little training, and we get to work with them and mold them and watch them grow into very successful tools. Plus, to start to create a bond with that dog and hopefully spend quite a few years with that dog is special.”

While Taylor and Chapo have been together less than two months, Taylor is confident Chapo will perform will and grow into a tremendous asset.

“He’s an outstanding dog,” Taylor said. “He’s got outstanding drive, he already loves the work. As soon as I get him out of the car, he gets to work on his own.”