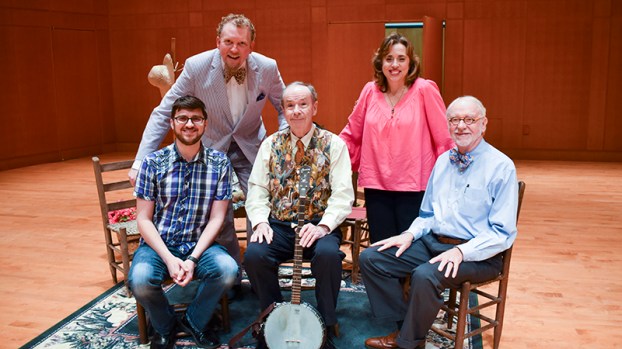 The audience sat in rapt attention Saturday morning as Storyteller Donald Davis leaned into the microphone to confide his childhood fear of the nuns who were going to “take care of him” when he got his tonsils taken out. The serious attention quickly shifted to laughter as the tale took a turn into the borderline absurdity that defines so many of Davis’ childhood tales.

Davis, along with Josh Goforth, Tim Lowry and Ed Stivender entertained roughly 2,000 people from across the country over the weekend at the 23rd annual Azalea Storytelling Festival at LaGrange College’s Callaway Auditorium. Carol Cain served as emcee.

“I think we are off to a great start,” said Joyce Morgan, who helped get the festival started. “We’ve got a great cast as well as music. Strings Attached played. We had about 75 third, fourth and fifth-graders play, and they were accompanied by two of the storytellers, Donald Davis and Josh Goforth.”

This year was Goforth’s first year performing at the festival, and organizers said he was a crowd favorite.

“Everybody was really complimentary, and Josh Goforth was a huge hit,” said Mary Ann Keck, committee member. “Everybody really liked him. … He even got a standing ovation one night.”

The Azalea Storytelling Festival boasts many return visitors each year, and attendees reported coming from all over the country for the storytelling festival, including visitors from Indiana, Tennessee and Alaska. A returning visitor from Austria even sat in the audience.

“It is great to have Azalea again, and we are looking forward to next year,” Morgan said.