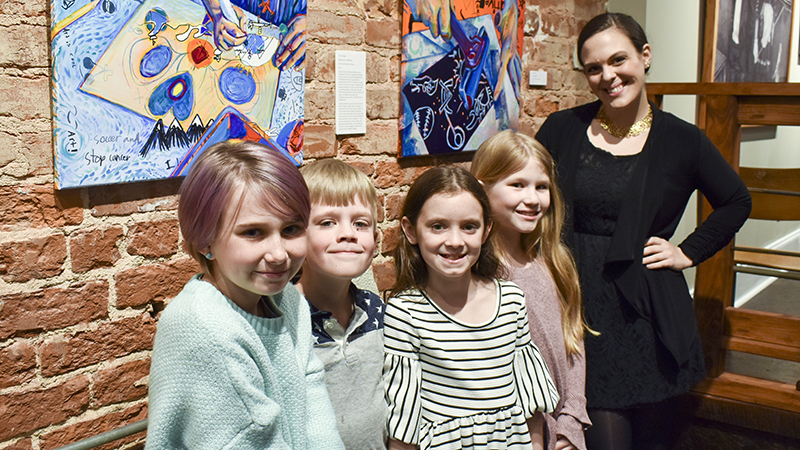 HOGANSVILLE – On Saturday night, some of the artists at The Suffering Artist couldn’t quite see over the buffet table — much less read the tags on their works — but their creative touch was nevertheless unmistakable at the show in honor of National Youth Art Month.

Artists young and old gathered at The Suffering Artist on Saturday to celebrate the opening of “A Little Child Shall Lead Them,” a show where local artists collaborated with some of their favorite children to create works of art. Some of the young collaborators leaned on parents’ hips as they looked at the work that they helped create on the gallery walls.

“[My daughter] was the inspiration for this,” said Sarah Swanson, the gallery owner and one of the artists in the show. “When we started doing some art together, I thought it would be so fun to do parents and their kids — or artists and kids that they teach. Get them to collaborate on some pieces. That is how this show was born.”

Swanson’s 2-year-old daughter, Salem, helped create several pieces in the show, including the background for a painting by her grandmother, Michelle Johnson.

“It is called negative painting or intuitive painting, and the grandchildren totally fill in the background with whatever they want — any color, any stroke,” said Michelle Johnson, one of the artists. “Then I sit there or walk by it and look at it until something comes to mind.”

Johnson said each of her grandchildren’s paintings lent itself to a different story.

“The chicken, my 5-year-old grandson did the background, and I sat and looked and looked at it,” Johnson said.

“Finally, I saw a mama bird feeding her baby birds. That is what I do. I just wait and see what pops out at me, and I fill in the rest.”

Meanwhile, each of the nine local artists who led the projects came up with their own ways to involve the children in their lives.

For Thea McElvy, that meant letting her granddaughter Allison McElvy create the bubbles that accompany her portrait. For Victoria Slagle, that meant giving her Montessori students who finish other work early the chance to draw on canvas. For William Jackson, it meant giving his grandson, Cameron Knight, the freedom to add Batman to his painting of robots.

One thing that practically all of the artists agreed on though was that their young collaborators had their own plans for the pictures.

“It is really neat to see how you can take a variety of artists and how they all collaborate differently with kids,” said Andy Porter, one of the artists. “Kids are very spontaneous.”

Porter collaborated with the youth group at Clearview Chapel to paint a series of strong female role models.

Unsurprisingly, the nine leading artists said that the most important part of the show was the children’s experience.

“This is mostly for the kids,” Swanson said. “Our goal is to try to be supportive of kids in art. In this day and age, arts are being taken out. We want to get them excited about it and get them to love creating their own art.”

They also emphasized the importance of children getting to visit art galleries and attend art openings.

“I think it is really important just to get kids involved,” Porter said. “I think a lot of times with events like this, you get a babysitter and leave the kids at home, but I think the more exposure they have to cultural events, the better equipped they are going to be to handle [them as adults].”

“A Little Child Shall Lead Them: An Exhibit Dedicated to Youth Art Month” will be on display until April 13.