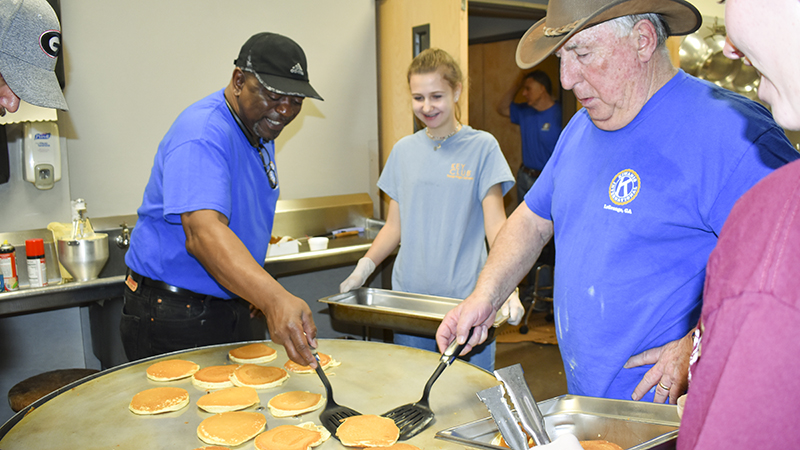 The event is one of the club’s two biggest annual fundraisers.

In addition to the funds raised by the event, Kiwanis members said the pancake breakfast is a great opportunity for people to spend time together.

“We have whole families coming in,” said George Elkins, LaGrange Kiwanis president. “We have groups from the Azalea Storytelling [Festival], card playing folks and people who just want to sit and read the paper and enjoy some social time before they go off into their day.”

Elkins said the club tries to coordinate with the Azalea Storytelling Festival, which took place just a few miles down the road. But for some who attended, the breakfast itself was the main event.

“I think it is a fun time for people,” said Patrick Crews, who helped coordinate between LaGrange Kiwanis and First Baptist Church on the Square, where the event was held. “There are people that I’ve seen that have been coming since it started. You want it to be a social event.”

Crews said the idea for the fundraiser came from a club that he participated in while living in Dublin. He said the club in Dublin typically serves 5,000 people pancakes at a fundraiser near St. Patrick’s Day, so when LaGrange Kiwanis began looking for fundraiser ideas, he suggested the pancake breakfast. That suggestion seemed to have paid off with some people traveling from out of the county for the event.

“I’ve seen folks from Harris County here, and we’ve got them coming in from West Point and Hogansville,” Elkins said. “They come from all around.”

IHOP donated the batter for the pancakes, and Piggly Wiggly and Kimble’s Food by Design donated food products for the fundraiser. IHOP is a partner with Kiwanis Club International.

“The only thing we have to buy are those link sausages,” Crews said. “At the end of the day, that is the only thing that we purchase now.”

Elkins said that Kiwanis also ended up purchasing some syrup when the breakfast used more than originally anticipated. However, the club’s total expenditure remained around $200.

“We appreciate the community supporting us,” Elkins said.